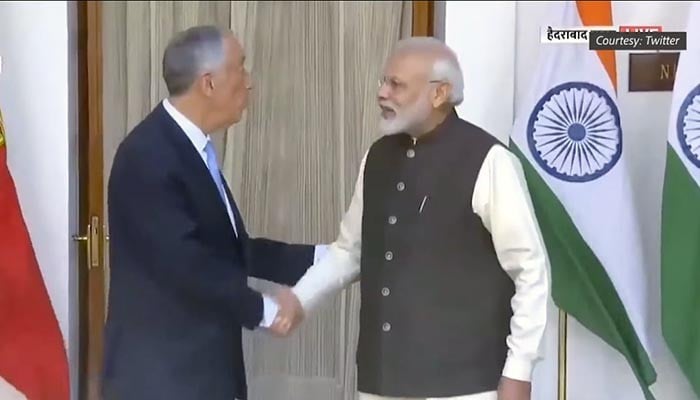 Indian Prime Minister Narendra Modi’s “handshake of handshakes” (as it is being referred to on social media) went viral on Friday as people were particularly amused at the way the Indian premier shook hands with the Portuguese president vigorously.

The Indian prime minister can be seen in the video, shaking Portuguese President Marcelo Rebelo de Sousa’s hand rather aggressively for 14 seconds.

The act induced hilarious comments from people on Twitter.

This is not the first time that the Indian prime minister has been the target of memes for the way he greets global leaders. Modi is infamous for his “bear hugs” to world leaders as well.

US President Donald Trump and Saudi Crown Prince Mohammed bin Salman have both been on the receiving end of Modi’s bear hugs which, like the handshake, prompted social media users to have a laugh at the Indian prime minister’s expense.

Sousa is on February 14 met Prime Minister Narendra Modi in New Delhi. He is in India on a four-day visit to discuss various agreements between the two nations.