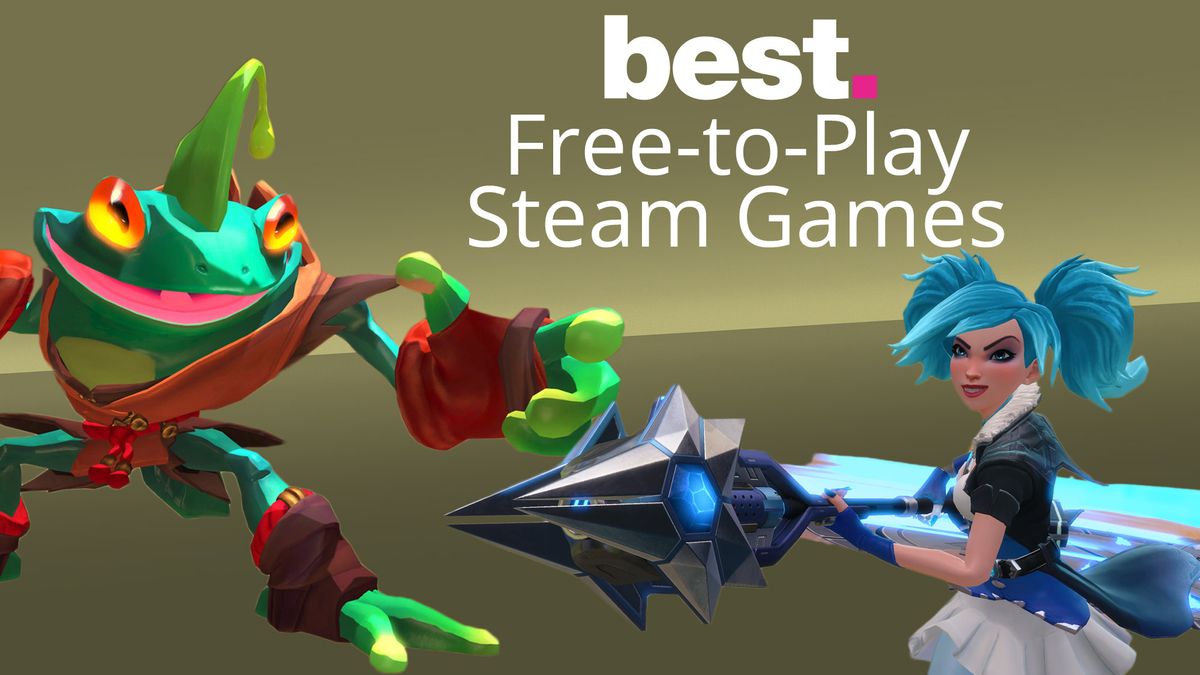 Nothing else offers endless fun better than the best free-to-play Steam games. Not only are these games just as entertaining as the most popular PC titles, but they’ll also save you a ton of cash.

While the best PC games are perhaps more popular titles in the gaming community, amassing a library of them will burn a hole in your pocket if you’re not careful. The best free-to-play Steam games, therefore, are just the ticket to fill the gaps in your collection or get that much needed distraction in your downtime without spending any more money. Although, in some cases, you do have to keep an eye out for those microtransactions and loot boxes, as those tend to pile up and end up costing you more.

These free games on Steam offer lots of fun while keeping your wallet safe and fat, so we gathered the best of them for you. Boot up your gaming PC, take a look at our picks for the best free-to-play Steam games of 2020 and download as many as you want.

When it comes to MOBAs (multiplayer online battle arenas), not every game has to be a fantasy-based romp with daggers, spells and cutesy champions.

Take the science fiction ship battles of Fractured Space. Sure, it’s a MOBA-style 5v5 affair, but now you’re in control of a powerful frigate as your hurtle across the stars and attempt to destroy your opponent’s base before your own suffers the same fate.

Skewing the classic MOBA concept as a space-based naval affair gives the setup you know and love a much-needed breath of fresh air, while blowing away all the cobwebs. You can customize your ship and crew, as well as hotkeying weapons and abilities so you can combine the best ships for the task ahead.

It’s one of the most exciting MOBAs on PC, and it’s free to play on Steam.

Much like Paladins, Gigantic offers a team-based shooter that’s part-Overwatch, part MOBA and part something brand new. Instead of having you defend a slow-moving carriage through a map (because that never gets old) or destroy an enemy base (in classic MOBA style), Gigantic tasks you with killing an enemy giant while attempting to protect your own. Sounds mad, right? It is, but a brilliant kind of mad all the same.

With an art style that mashes up Studio Ghibli flourishes and classic Disney cuteness, Gigantic’s 20-strong character roster offers enough skills, weapons and attributes to appease even the pickiest of players.

Each match is a 5v5 event, with players working together to power up their own Guardian (that’s your giant weapon/walking base) while risking it all to lay siege to the enemy. The roving nature of your Guardian makes every match an intense affair, and best of all, it’s 100% free on Steam.

Idle Big Devil from Hong Kong Spark Software may still be in Early Access, but the idle RPG game has already gotten a lot of raving reviews from Steam gamers. While it is an idle game, which lets you progress through the game without much interaction, there’s a lot of stuff to do while you wait so it never gets boring. You also get a ton of free currency in the initial play, giving new players a chance to progress quickly.

In this game, you’re appointed by the king as the lord of killing the Undead and creatures possessed by evil spirits. You do so with the aid of a total of five heroes whom you recruit yourself throughout the course of the game. As you travel the continent, you can participate in different events that allow you to collect loot, as well as complete daily tasks that reward you with prizes. You can also gather resources to power up your heroes and upgrade your castle.

Idle Big Devil does get a bit complicated and harder as you progress, and you will get to a point where you have to decide whether to spend money or endure a slower progression in the game. However, this game can be completely free to play, if you choose not to spend money.

Paladins launched just after a certain team-based shooter from Blizzard, and it’s hard not see the similarities. Still, that doesn’t mean Hi-Rez Studios’ free-to-play FPS isn’t worth your time – it just means you get play something that’s often just as fun and rewarding without forcing you to break the bank with a full-game price.

With a menagerie of characters to choose from (known as Champions), each match offers an objective-based experience that feels more like triple-A fare than other free-to-play shooters.

Paladins includes everything from Overwatch-style payload defence/offence to a Survival mode akin to the popular ‘battle royale’ sub-genre made popular by PlayerUnknown’s Battlegrounds and Fortnite. It offers a consistently enjoyable and rewarding place to spend your time, even if it’s a tad derivative.

It’s free to play on Steam, and there’s no need to sink any money into it as long as you’re willing to grind for the first few hours.

We’ve all fantasized about what it would be like to roam Europe in the Middle Ages. Well, with Crusader Kings II, you can do exactly that, playing a Christian lord looking to expand and preserve his dynasty while the whole continent is in turmoil. And, it’s not just invaders you have to worry about. Your vassals and courtiers are also busy plotting against you too.

You’ll also introduce laws, make friends with other nobles and defend your religion against the heretics. Whatever decision you make, just remember that this is a game of strategy. So even the smallest ones can affect whether or not your dynasty will survive the Dark Ages.

If you fancy playing with friends, this game has a competitive multiplayer mode. So you can play with up to 32 other players.

Free-to-play shooters in their more traditional, deathmatch-esque form are often a hit and miss affair, but despite all those polished triple-A offerings from the likes of Activision and EA, Crytek Kiev has managed to put together a robust little FPS that can be just as exciting and enjoyable as many other entries in the bullet-ridden genre.

Warface: Blackout offers four classes to choose from, with weapons, gear, attachments and specific skills tied to each one. Having the right balance of classes in your squad adds a more Battlefield-style teamwork ethic, especially when engineers can repair armour and snipers can pull off game-changing one-shot kills.

After four years of rotation on the field, Warface has also honed its online economy, neatly offering you the ability to spend in-game currency on a rental system that lets you test out guns and gear before investing time and cash into your own version.

Are you looking for a MOBA spin-off that’s light on the RTS elements but deep enough to keep you engaged through every match? Well, we’ve got just the free-to-play beauty for you. Art of War: Red Tides takes that classic MOBA structure – funnelling you down a channel with loads of units as you attempt to destroy a base at the other end – but strips out all the busywork in between. It might not appeal to the hardcore among us, but for those looking to replicate the relaxed involvement of a mobile title at your PC, this is right up your alley.

That’s not to say it’s a spectator title. You’ll still need to survey the battlefield and use your energy reserves to build units to counter those already on the field. There are a trio of modes available, but it’s in the 3v3 mode the setup works best, with matches often coming down to which team pulls off the best combo.

Okay, so the word ‘war’ features quite a lot in some of the best and most popular free-to-play titles, but that’s because few things are as fun to wage when you’re spending no money. Another such example is Warframe – an online melee brawler/shooter that’s evolved into one of the most enjoyable games on PC.

Putting you in control of a sword-wielding space ninja (yes, it’s as cool as it sounds), the game feels like a cross between For Honor and Destiny 2, with modes offering PvE and PvP matches to keep you engaged. There’s even a story mode, and it’s actually pretty fun, if a little repetitive in places.

Developer Digital Extremes has also been dedicated to Warframe, rolling out regular updates and events that offer new upgrades and expansion on its rich lore. It may have floundered on consoles, but Warframe is one of the best examples of how to do the best free Steam games right.

There’s been a resurgence for the sci-fi dogfighting subgenre in the last few years – thanks in part to the rise of VR – but there aren’t many titles that let you take to the stars and shoot space ships for nada. In fact, there’s just the one, and it’s one of the most enjoyable games we’ve played on this list.

The game is split into four main modes – PvP, Open Space, Sector Conquest and Missions – offering plenty of content for absolutely no pounds/euros/dollars. You can atomize other players in classic deathmatches, explore an impressively vast universe in Open Space, or head into co-op for a bit of PvE action in Missions. You can set up custom battles with friends if you’re in mood for a private dust up. Ship designs offer different attributes depending on your play style, and earning new ones can be pulled off without spending a penny if you’re willing to grind.

Part MOBA, part RTS, Atlas Reactor borrows those now ubiquitous decision queues and adds a neat twist: instead of each player acting out their turn one after the other, everyone gets to play at the same time. The result? A strategy game in actual real-time as players move units around the map, exchanging actions in a chaotic flurry. It can be a little more luck based than we would like (since you don’t know what you’re opponents are going to do next, it’s often guess work alone), but the pace soon hooks you in.

Decision, one of two main modes in the game, forces you to make these decisions in 20 seconds or under for each turn (making every match hella fun and hyper intense), while Resolution slows things down into four phases as you plan out your moves and set traps as you attempt to win each 4v4 showdown.