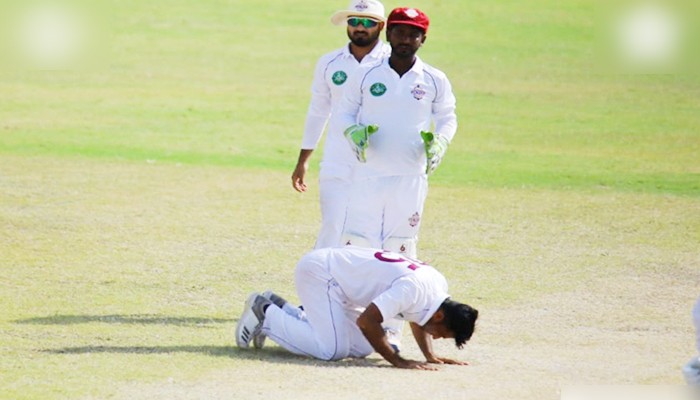 KARACHI: Wrist spinner Zahid Mahmood capped a perfect two-and-a-half-day for Southern Punjab as they carved out a convincing inning and 96 runs victory over Northern in the first-round match of the four-day first-class Quaid-e-Azam Trophy.

The match took place at the National Bank of Pakistan Sports Complex on Tuesday.

His Test performance comes after he finished as the ninth most successful bowler in the National T20 Cup with 12 wickets.

Northern, trailing by 342 runs on the first innings and resuming the third day at 31 for three, were sent packing for 246 with Hammad Azam finishing as the top-scorer with a 117-ball 79 that included eight fours and two sixes.

From this fixture, Southern Punjab collected 28 points, including 16 for an outright win, one for an innings victory, five for batting, and six for bowling. In contrast, Northern had to settle with two bowling points.

In the second round fixture, which will start on Saturday, 31 October, Southern Punjab will take on Balochistan in a televised match at the National Stadium, while Northern will stay at the NBP Complex where they will take on Central Punjab.

At the UBL Sports Complex, Balochistan were sensing a victory against Khyber Pakhtunkhwa, who finished the penultimate day’s play at 133 for four after being set a target of 413.

Khyber Pakhtunkhwa, in their run-chase, had slipped to 29 for three but Adil Amin (56 not out) and Kamran Ghulam (51) added 104 runs for the fourth wicket to keep their side’s slim hopes alive.

Earlier, Balochistan resumed their second-inning at the overnight score of 34 for one and declared at the score of 217 for eight. Notable run-getters for Balochistan were Sami Aslam (48), Taimoor Ali (41 not out), Yasir Shah (41), Imran Farhat (29), and Abdul Rehman Muzammil (22).

Fawad Alam stroked his 28th Quaid-e-Azam Trophy, third in succession and 35th overall, as Sindh and Central Punjab fixture was delicately poised in the National Stadium broadcast match, produced by the PCB.

Fawad, resuming at his overnight score of 90 in Sindh’s 196 for six, was dismissed after scoring 115 that helped the home side to 239 to grab a slim but crucial 32-run lead. When stumps were drawn for the third day, Central Punjab were 120 for four to lead the home side 88 runs with six wickets standing.

Usman Salahuddin (35) and Mohammad Saad (26) will resume Central Punjab’s second inning on Wednesday. The two batsmen have already added 64 runs for the unfinished fifth wicket after Mohammad Umar and Mohammad Asghar had grabbed two wickets apiece to reduce the visitors to 56 for four.

Fawad, who recorded his 10th century at the National Stadium, faced 250 balls during a 388-minute vigil at the crease. He hit nine fours. Together with Tabish Khan (24), Fawad put on 117 runs for the seventh wicket that saved Sindh’s blushes after they had slipped to 113 for six.

The good news for Central Punjab and Pakistan was the performance of star fast bowler Hasan Ali. Returning after a lay-off due to back injury, Hasan sent down 21.3 overs and was rewarded with three wickets for 40 runs.

However, Waqas Maqsood was the most impressive Central Punjab bowler when he grabbed four wickets for 56 runs. Ahmed Bashir took two for 56, while Ehsan Adil picked up one wicket.

At the NBP Complex, Southern Punjab beat Northern by an inning and 96 runs

At the NSK, Sindh won the toss and elected to bowl first

At the UBL Sports Complex, Balochistan won the toss and elected to bat first