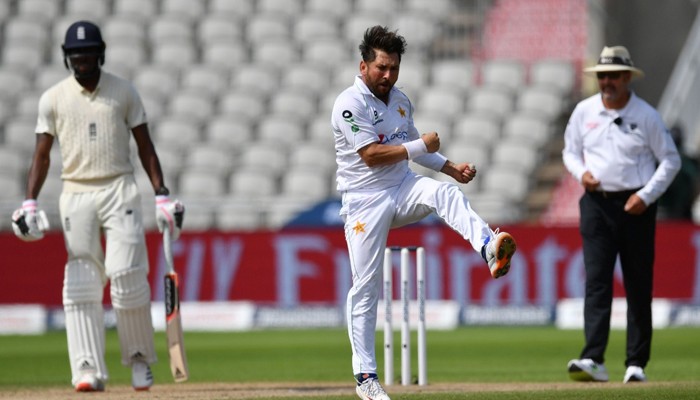 MANCHESTER: Yasir Shah bagged three wickets after lunch as Pakistan sent back England for 219 to maintain their control of the first Test on the third day at Old Trafford on Friday.

The leg-spinner ripped through England’s middle and lower order with a burst of three wickets for four runs in 27 balls on his way to figures of 4-66 in 18 overs.

England, who had been 159-5 at lunch in their first innings, lost their last five wickets after the break for 60 runs.

That gave Pakistan a first-innings lead of 107 runs after they had made 326 led by opener Shan Masood’s Test-best 156.

England resumed Friday on 92-4, which represented an improvement on their dire position of 12-3 on Thursday.

Ollie Pope began the day on 46 not out and wicketkeeper Jos Buttler on 15, with no more specialist batsmen to come.

Buttler, with just one hundred from his previous 44 Tests, was under particular pressure to score runs after costly mistakes behind the stumps.

He dropped Masood on 45 and then missed a chance to stump him on the same score — errors that intensified a debate about whether the World Cup-winner should remain England’s red-ball gloveman.

Pope completed a composed 81-ball fifty, including six fours, which followed the 22-year-old’s 91 against the West Indies in last month’s third Test at Old Trafford.

But there was little he could do when, on 62, an 87 mph Naseem Shah delivery climbed late off a good length to take the shoulder of his bat, with Shadab Khan holding a good low catch at gully.

It was a wicket greeted with plenty of cheers by the fielders and reserve players watching from their hotel balconies in a series being played behind closed because of the coronavirus.

England reached lunch five down but, at an increasingly sun-drenched Old Trafford, Yasir was soon in the wickets.

He bowled Buttler between bat and pad for 38 as the batsman, playing for turn, was beaten by a straight delivery.

Yasir then took the shoulder of Dom Bess’s bat thanks with a ball that turned and bounced, with the diving Asad Shafiq taking a good slip catch before Chris Woakes, playing a cross-bat shot, was clean bowled by a quicker delivery.

Stuart Broad, fresh from his 62 in a series-clinching victory over the West Indies at Old Trafford last month, counter-attacked and hit Yasir for a six before he was dropped next ball on the boundary by Shadab.

Jofra Archer was well caught by Mohammad Rizwan off Shadab to cap a fine display by the wicketkeeper that was in marked contrast to Buttler’s performance behind the stumps, before the leg-spinner had last man James Anderson lbw.