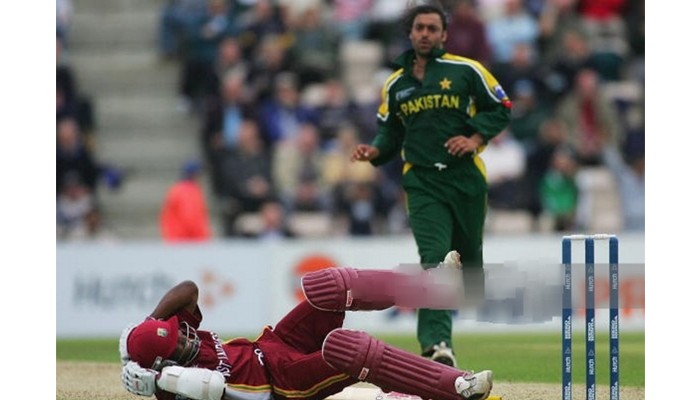 Fast bowler Shoaib Akhtar used to drive fear into the hearts of batsmen who dared face him when he was bowling at his prime.

The former speedster, dubbed as the Rawalpindi Express for the ferocious pace at which he bowled almost a decade ago, shared a creative illustration on Instagram.

The llustration shows Shoaib leaping mid-air, about to bowl a delivery with several batsmen that he had hurt with his fiery deliveries over the years, lying on the ground, writhing in pain.

The image shows illustrations of Brian Lara, Saurav Ganguly, Gary Kirsten and other players hurt over the years by Shoaib.

Here are some videos from YouTube in which Shoaib Akhtar’s blistering pace put some batsmen in a lot of trouble when they failed to connect the bat with the bowl.

That time when Ganguly failed to pull the fast bowler and instead, went down on his knees.

Bowling at blistering pace, Shoaib ended up hurting Gary Kirsten when he bowled a bouncer to him and the left-handed South African batsman failed to hit it over the fence.

However, many Pakistanis remember this. Shoaib also recalled how bad it felt when he knocked down Brian Lara with a fast-paced lethal delivery that almost took off his head.