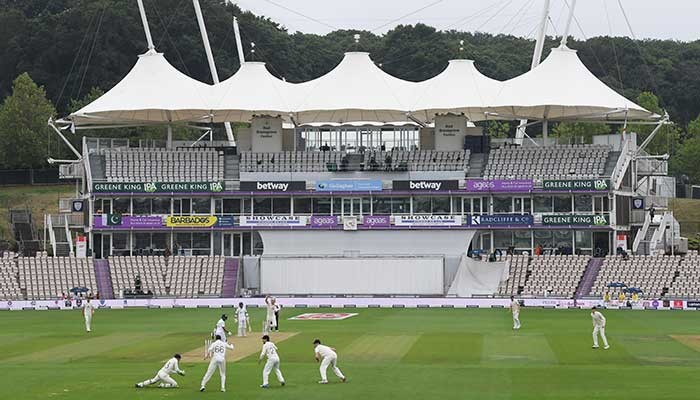 SOUTHAMPTON: Rain in Southampton has delayed the start of day three of the second Test between England and Pakistan.

This was the latest interruption in a match plagued by stoppages for rain and bad light.

Pakistan are currently 223-9 in their first innings after winning the toss following a second day where only 40 overs were possible.

Mohammad Rizwan had batted with huge skill and resolve in overcast, swing-friendly conditions, to be 60 not out on what was Pakistan´s Independence Day.

In partnership with dogged tailender Mohammad Abbas (two off 20 balls), the wicketkeeper had shepherded Pakistan past 200 in a ninth-wicket stand of 39 after the pair had come together with the team struggling at 176-8.

This was Rizwan’s second fifty in eight career Tests following his 95 against Australia in Brisbane in November.

Pakistan were also indebted to opener Abid Ali (60) and Babar Azam (47) for painstaking innings when the conditions were stacked against them.

Meanwhile in-form paceman Stuart Broad became the first England bowler since off-spinner Graeme Swann 11 years ago to take at least three wickets in seven consecutive Test innings thanks to a return of 3-56 in 25 overs.

Broad has now taken 25 wickets in four Test so far this season at a misery average of 12.88.