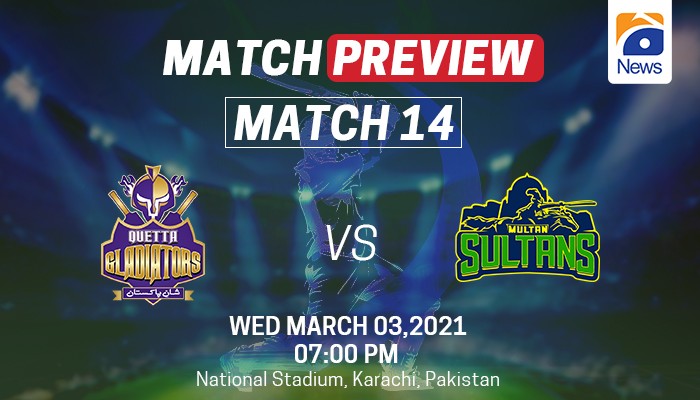 KARACHI: Former champions Quetta Gladiators will look to get off the mark when they take on Multan Sultans in match number 14 of Pakistan Super League (PSL) 2021 today.

Quetta, the champions of PSL’s 2019 edition, are currently placed at the bottom of the points table and have yet to win a match — they were beaten in all four games they’ve played so far.

Multan are also struggling to find the form. They won just one game — against Lahore Qalandars — in the four matches they’ve played. They are also desperate to improve their position on the points table before the next leg.

Sultans will have its hopes pinned on captain Mohammad Rizwan who has scored 231 runs in four games, including two half-centuries.

James Vince and Sohaib Maqsood are two others who can boost Mutlans’ confidence in batting while young Shahnawaz Dahani will be the one to watch out among their bowlers.

For Quetta, the form of Sarfaraz Ahmed — their captain — is a major boost. He will be coming to the match with back-to-back 50s to his credit and the wicket-keeper batsman will be looking to add another half-century to his PSL6 score.

The form of other batsmen, meanwhile, will be worrying for Gladiators who are struggling to post big totals on the board. A big knock is due on Faf du Plessis — and Quetta will hope it comes tonight.

The side will be without Tom Banton who was tested positive for COVID-19, which will leave Gladiators with no choice but to continue with Cameron Delport.

Moreover, of the five games played between the two sides, so far, Gladiators have won 3 while Sultan won 2.

The toss, as in all previous games, is going to be crucial, once again and the team winning the toss is likely to opt for the field.