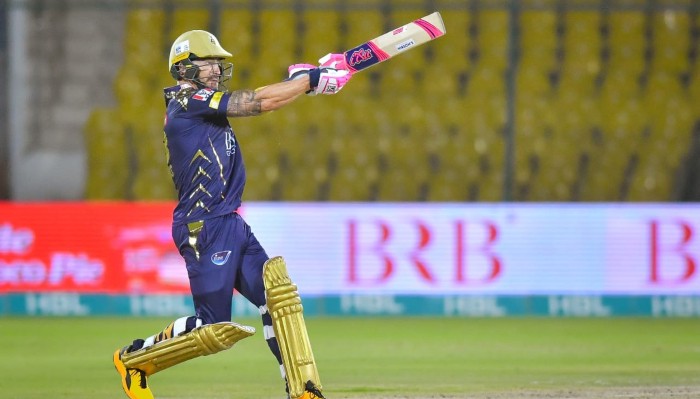 KARACHI: Quetta Gladiators’ South African cricketer Faf du Plessis is confident that once the Gladiators gain the momentum, they’ll be a very tough team to beat in the ongoing edition of the Pakistan Super League (PSL).

In an exclusive interview to Geo News, the former South African captain spoke about his experience of visiting Pakistan in the past six months. He gave thumbs up to the security arrangements in the country and hoped to see some ICC events being hosted in Pakistan.

Opening up about Gladiators’ poor start in the league, the South African veteran hoped that his side will learn from the mistakes of previous games and will come back stronger in the next matches.

“It is good to be playing for Gladiators. I like the kit. We’ve got a good team. I’m sure that we’ll get a bit of momentum going and once we got that momentum, we will be a very, very tough team to beat. There are some quality players in this team and I’m sure will be turned around very quickly,” he opined.

“I wasn’t here for the first two games but I’ve heard the same thing pretty much happened, we got into a position where we can win the game and, then obviously, due to some really good batting and also the conditions there we couldn’t.”

“Last night Zalmi had a really good finish. We didn’t bowl particularly well at the death. We can learn from that and get back stronger for the next one,” he hoped.

The Gladiators’ batsman said that that the side needs some special performances to bring the team back in the tournament.

“It is by no means the end of the tournament,” he said about Quetta’s start.

Security not an issue in Pakistan

Faf du Plessis has been a frequent visitor of Pakistan since the cricket returned to the country. He first led a World XI side to Pakistan in 2017 that paved the way for more cricket in Pakistan.

Last year, he visited Pakistan to represent Peshawar Zalmi in the PSL playoffs before coming back again with the South Africa team for the series against Pakistan earlier this year. Now he is here again to represent Quetta Gladiators in the PSL – his third visit to the country in less than three months.

Giving thumbs up to security arrangements in Pakistan, the South African cricketer hoped for more cricket, including ICC events, to be hosted in-country.

Even in the future, there might be an ICC event here again. All things are really looking positive. As a player, I’m very comfortable here. Obviously, as you’ve seen I’ve been here quite a lot in the last six months,” he said while sharing his experience of being in Pakistan.

PSL, a great opportunity for youngsters

The former South African skipper said that leagues like the PSL provide an opportunity to the country’s domestic talent to gain wisdom and experience by playing and sharing a dressing room with international stars.

“I’ve seen the benefit of this by playing in the IPL for 10 years now,” he said when asked how T20 leagues like PSL help youngsters to improve their skills.

“Young players can learn from the guys like Chris Gayle and all the guys that are playing in the tournament this year are players that have played international cricket for a long time,” he said.

“Facing guys like Dale Steyn, who’s been one of the greatest players of his generation, young guys coming up against him. So when it comes to international cricket, they’ve already lost that fear of playing against international superstars, so I think it’s really good and really important for domestic cricket that how well you combine the experience of international and local cricket,” Faf du Plessis added.

Praising Pakistan’s Mohammad Hafeez, the South African star said that Hafeez is playing the best cricket of his life and for young batsmen to play with him now and to tap into that experience would be something precious.

“It’s just the gift to play with someone like that,” he said.

He added that the fast bowling talent emerging from Pakistan is tremendous, seeing all the explosive batsmen and bowlers who can bowl 140+ is a good sign for Pakistan Cricket.

“Almost every team has two or three of those explosive batsmen and once again fast bowling, 18,19,20,21-year-old guys that are bowling and bowling 140 plus in every team so it’s really looking good for Pakistan cricket,” he shared as he spoke about young talent in PSL.

“This tells me that Pakistan is looking at a really good place from where its cricket is standing. The competition is very strong which means the cricket in Pakistan is healthy,” he remarked.

‘Matter of skills, not wickets’

Faf du Plessis also shared his thoughts on the ongoing debate of teams struggling to bat during away series and said that the issue is more related to skills than just the wickets.

He added that when South Africa toured Pakistan recently for the Test series, the wickets were not bad but his side was outplayed because the batting skills were not up to mark.

“When subcontinent teams come to South Africa or Australia or England, they struggle, and the same when we travel India or Pakistan or Sri Lanka, we struggle. So it’s obviously telling you that the batting skill needs improvement,” he said.

“When we played in Pakistan, the pitches were not that bad, they were actually really good pitches. We were outplayed because our batting skill wasn’t where we needed to be. In the way of playing Test cricket, you need to be there to score runs, and we weren’t there enough times staying at the crease,” he pointed out.

He also highlighted the effects of T20 cricket on Test batsmen.

“T20 has fast-tracked everything else. So now you know guys are playing a lot more positive than they used to in the old days and I think that’s also got a role to play with the genuineness of Test cricket and the technique of Test cricket, where you trust your defence for longer,” Faf du Plessis said.

“Now in Test cricket, we don’t trust our defence as much we want to try and take the game on a little bit and when a pitch is difficult, you can’t survive long because your defence is not good enough to survive tough conditions,” the former South African captain highlighted.

‘T20 is just about power hitting’

The veteran of 69 Tests, 143 ODIs, and 50 T20Is said that T20 Cricket is not just about hitting sixes and boundaries every ball and batsmen who play with composure are more likely to win the matches than the one who would try to hit a six every ball.

”The thing that you’re looking for in your side is guys that can hit sixes and you want big hitters. But what you’re seeing those proper batsmen are almost a consistent way of winning games,” he said while citing examples of Mohammad Hafeez and Babar Azam who are usually not known as power hitters.

“They play with so much skill and so much consistency, that they can win you more games than a guy just coming in and trying to hit sixes every ball. So I think we’re seeing a trend now where those guys are becoming the really valuable players to any T20 side because they can win you six, seven times out of 10,” he added.

Faf du Plessis added that strike rate is important but you don’t need to have sixes all the time to survive strike rate and that batsmen can still maintain a good strike rate by minimising the dot balls.

‘Babar can be as good as Kohli’

When asked if he sees Babar Azam as good as Virat Kohli, Kane Williamson, and Steve Smith, the former South African captain said that Babar has got the talent to be like them but he has yet to play the amount of cricket the others have played.

He, however, added that Babar can be there in the next few years.

“I think right now, the only difference probably with all of them is the fact that Babar hasn’t played as much as Kohli has. The guys that are at the top of their game have done it for a very long time. But, Babar has that, he’s got all the talent, he’s got all the potential, he’s got all the skill, and he’s shown that the last year,” he said about the Pakistani captain.

“Obviously, those guys [Kohli, Smith & Williamson] have been doing it for five-plus years. So, there’s no reason why you shouldn’t be in the next few year’s time because he’s still so young. He’ll just get better as a better. I think we’ll definitely see when you look five years down the road, you’ll look at him and his numbers will be just as good as those players over a longer period of time,” Faf said.

Share
Previous Thailand kickstarts coronavirus vaccination campaign
Next Sony FX3 vs Sony A7S III: which is the best 4K camera for you?