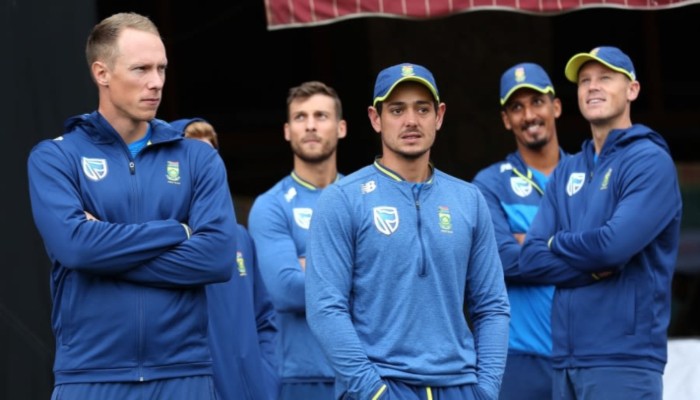 ISLAMABAD: South African team is expected to undergo a total of nine COVID-19 tests during their one-month stay in Pakistan, The News reported on Thursday.

The team will arrive on January 16.

South Africa has been one of the worst-hit countries by COVID-19 with the second wave of the pandemic much rampant in major cities. Therefore, the host team will also undergo a testing procedure twice before joining the bubble.

The visiting team’s first test will be conducted on January 16, the second on January 19, and another on January 22. However, both the teams will again undergo test on January 25 and then again at the end of the first Test.

COVID-19 testing, however, will continue till the end of the T20 series.

On the other hand, Pakistan players will also undergo seven tests including five during their stay in the ‘bio-secure bubble’.

Extensive testing is being done to ensure the safety and security of the players as well as those who are associated with teams in any way.

“All the individuals connected with the home series in any capacity will have to stay in the bubble and follow all the precautionary measures,” a PCB official told The News.

“Special arrangements have been finalised by the PCB’s medical department in this regard,” the official added.

Meanwhile, the Pakistani squad will be asked to assemble in Karachi on January 19 where they will undergo training ahead of the start of the first Test.

“Since the team has gone through a tough period in New Zealand so it has been decided to hold one-week training camp for the players ahead of the Test series,” the official said.

Responding to a question about captain Babar Azam, the official said that he has been declared fit for the series.

“I think the team’s management in New Zealand did a great job by not exposing the injured player prematurely if otherwise, Babar’s inclusion in the second Test against New Zealand could have proved a risky affair,” he said.

Source Link: Proteas to undergo 9 coronavirus tests during their one month stay in Pakistan