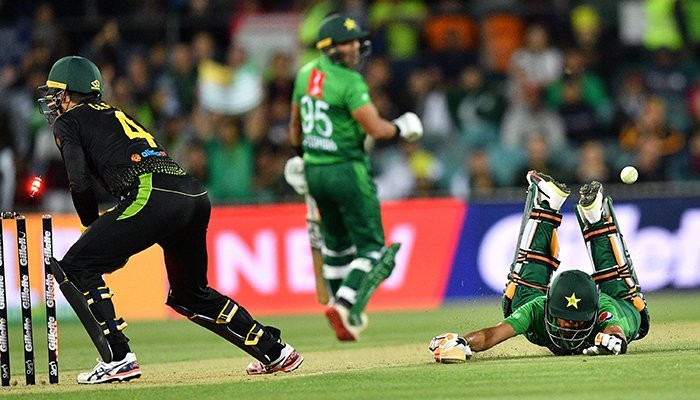 Australia have won the toss and decided to field first in the third and final T20I at Perth Stadium. It means that the Babar Azam-led Pakistan are batting first again, just like they had in the first two matches of the series.

Starc to Rizwan, OUT bowled

Starc to Babar, OUT lbw

Australia currently have a 1-0 lead in the series, thanks to Steve Smith’s 79-run match-winning innings on Tuesday.

The opening match of the series was washed out due to rain, which had saved the tourists from going down 1-0 there and then.

Babar Azam and co made wholesale changes to the line-up, with the out-of-form Fakhar Zaman, Asif Ali, Mohammad Irfan and Wahab Riaz all dropped.

Babar says batting first would not have been his choice, had he won the toss.

If we’d won the toss we would have bowled first. We have two debutants. We want them to play and have a chance on this wicket and the wicket is good for bowling. — Babar Azam

Finch says his decision reflects the moisture in the pitch which he wants to exploit.

There’s a little bit of moisture in the wicket so hopefully we can get the brand new ball to move around a bit and chase it down later on. There’s some stats that support that as well. We’ve just gone with the one spinner on this wicket. We think the extra spinner will be valuable. — Aaron Finch