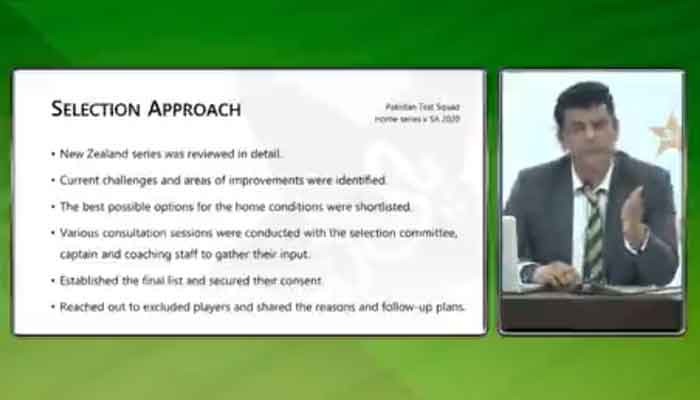 The press conference organized by the Pakistan Cricket Board (PCB) on Friday to announce Test squad for the home series against South Africa was unprecedented in many ways.

For many journalists covering cricket regularly, the scenes were different. There was a laptop, a projector and a screen that got everyone’s attention as this was never done before during a squad announcement.

The 42-year-old explained each exclusion and inclusion to the journalists with help of data-based presentation on screen, providing statistics of every player in question.

“Pakistan is behind in terms of scientific analysis of the data for team selection. I will definitely look on data and comparative and situational analysis to pick a suitable player,” Wasim said.

“It is also important to explain why a player was preferred and why he was excluded and there should be strong reasons to select or deselect any cricketer from the squad and players must be told why they were dropped so that they can work on areas where they are needed to bring improvement,” he added.

According to Wasim, it was important for players’ selection to compare their performances in specific conditions through stats achieved.

The former cricketer explained the approach by showing different breakups of how players’ performances were judged and analyzed through data.

Some sources also confirmed that Wasim spoke to the players who were dropped from the team individually. He explained them the reasons and provided them targets to achieve if they want to make a comeback to the squad.