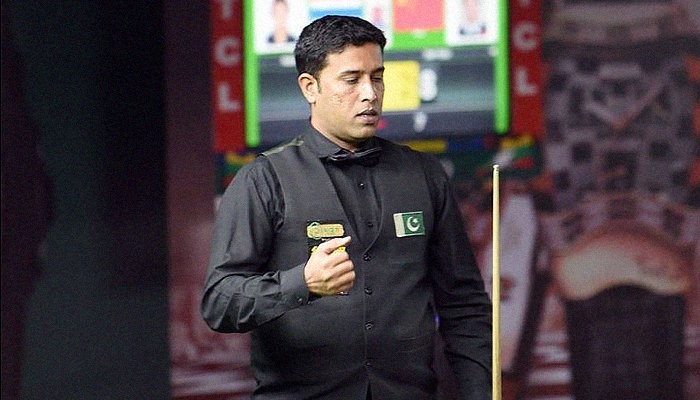 Pakistan’s top cueist Mohammad Asif on Friday qualified for the semi-final of IBSF World Snooker Championship in Antalya, and is certain to bag a medal for himself after beating Thailand’s Thanawat Tirapongpaiboon 6-4 in the quarter-final.

While Asif displayed some of his brilliant snooker skills throughout the competition, he was also lucky as his opponent couldn’t take advantage of some of his mistakes.

The Thai cueist, who was relegated from professional circuit in 2016, started off with a break of 57 to take first lead against Asif. But Asif came back strongly by securing a century break in the second frame to level the game at 1-1.

Thanawat regained the lead by winning the third frame but Asif leveled it in the 4th with a break of 53. The 2012 IBSF champion from Pakistan got the lead in the match for the first time when he played a break of 66 to win the 5th frame.

However, the Thai cueist leveled it at 3-3 by taking the 6th frame.

He would have wrapped up the match in the 9th frame but missed the last red ball, allowing Thanawat Tirapongpaiboon to clear the frame.

In the 10th frame, Asif entered color balls with a decent lead on the table but missed pocketing green thrice, which otherwise looked an easy ball. However, his opponent couldn’t capitalise on those setbacks.

Just when it looked that the frame had gone away from Asif, he made a foul while breaking a snooker which allowed Thanawat to take four colors but then, he missed black.

Asif, at this point, did what he is known for. He potted the black beautifully to confirm his place in the final four.

Asif will play Thailand’s Kritsanut Lertsattayathorn in the best-of-13 semi-final later this evening.

Share
Previous We will ‘pick up bodies’ but won’t leave: Fazl
Next The struggle of Kashmiri women during Indian lockdown – World

Sourav Ganguly showed us the way to move forward without fear: Sreesanth on Twitter

Sourav Ganguly’s claims of Asia Cup being cancelled have no merit: PCB