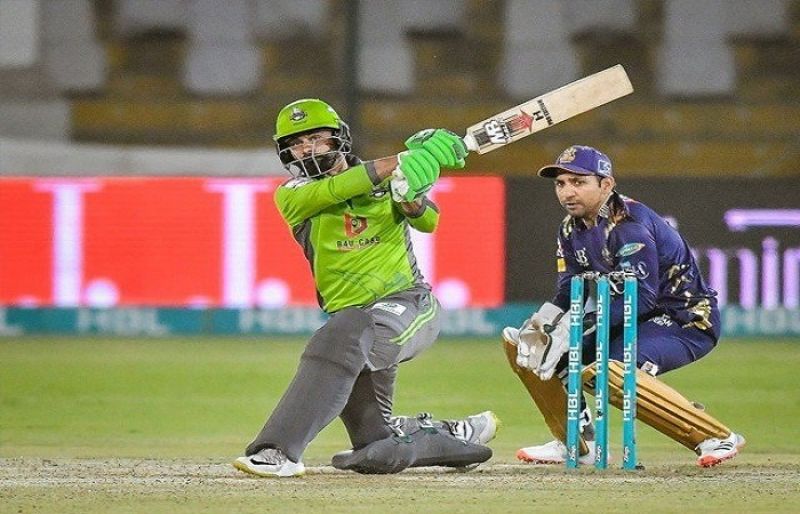 Mohammad Hafeez showed experience and class as Lahore Qalandars came from behind to defeat Quetta Gladiators in the fourth 2021 Pakistan Super League fixture at the National Stadium in Karachi on Monday.

The Qalandars, who were set a respectable target of 179 by the Gladiators, won the match with nine wickets in hand and 10 balls to spare.

The innings was opened for Qalandars by Fakhar Zaman and Sohail Akhtar who frustrated the Gladiators’ ballers with their stable partnership and multiple boundaries.

They cemented their partnership over the next few overs before Akhtar (21) was bowled by leg-spinner Zahid Mahmood.

Zaman became the second player in today’s match to score a half-century, hitting 50 off 31 balls.

Akhtar was replaced by Mohammad Hafeez, who along with Zaman lifted up their score from 69-1 at the end of 10 overs to 131 by the 15th over without any further wicket loss.

The Qalandars earlier won the toss and decided to bowl first.

Captain Sarfraz Ahmed and Chris Gayle were undoubtedly the star scorers for the Gladiators, putting up a strong partnership after opener Tom Banton got out in the second over and Saim Ayub scored only three runs before returning to the pavilion.

Haris Rauf was the pick of the bowlers for Lahore Qalandars, claiming three wickets.

Banton and Ayub opened the batting for the Gladiators, but they suffered an early loss when Banton (4) mishit a ball from Rauf and was caught by Ahmed Daniyal in the second over.

But the ballers were unable to take down Gayle and Ahmed who built a strong partnership.

The Qalandars were also punished for dropping two catches from Gayle, who scored his 50 off 32 deliveries — his first in the PSL.

Captain Sarfraz (40) lost his wicket in the 13th over, caught out by Ben Dunk off Haris’ ball.

Gayle was bowled out by Rashid Khan in the very next over after scoring 68 off 40 balls.

Gladiators lost their fifth wicket when Azam Khan was caught out by Afridi on Daniyal’s ball.

Rauf struck again in the last over, bowling out Ben Cutting.

The Qalandars made one change to their playing XI, with Haris Rauf entering in place of Salman Mirza.

The Gladiators entered the match after suffering a seven-wicket defeat at the hands of Karachi Kings in the first match of this year’s tournament on Saturday. The Qalandars, meanwhile, won their opening match by four wickets against Peshawar Zalmi on Sunday.