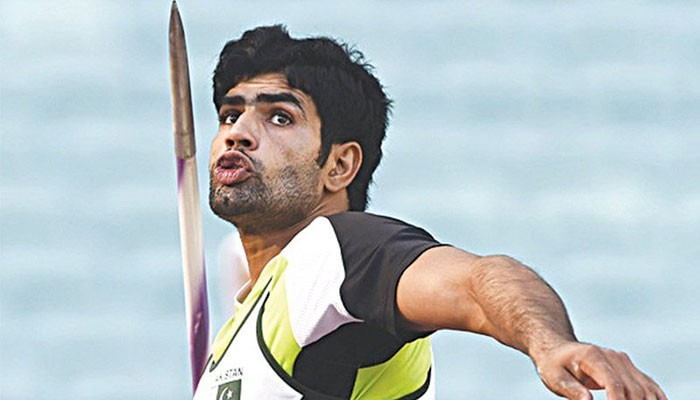 KARACHI: In a country obsessed with cricket and passionate about fast bowling, a javelin thrower is eager to change the perspective of athletics in Pakistan.

Twenty-two year-old Nadeem Arshad, who won bronze for Pakistan in 2018 Asian Games, further improved his national record in Javelin Throw on Thursday with a throw of 83.65 in National Games in Peshawar.

He has now sight on meeting the Olympic entry standard of 85m.

“I have my eyes on direct qualification to Tokyo Olympics and I am very confident that I will achieve the entry standard of 85m to make my place in mega-event,” Arshad told Geo.tv after his career-best performance in Peshawar.

“Not just an entry, I want to win a medal for Pakistan in Olympics,” he said confidently as he travelled back to his village near Mian Channu in Khanewal. Arshad came into limelight when he won bronze at the South Asian Games in Indian City Guwahati throwing the javelin for 78.33m, his first national record then.

He went to win another bronze medal for Pakistan in the same year at Asian Junior Championship in Vietnam.

Since then he has been improving his marks, in the 2018 Asian Games in Jakarta, where he also bagged a bronze medal for Pakistan, Arshad threw the javelin for 80.75m, another new national record for him.

In the world championship at Doha this year, Arshad improved further achieved 81.52 mark.

And on Thursday, in national games, he reached the 83.65m mark.

“I broke my record six times. And I am aiming to touch 90m mark,” he said.

“The entry standard for Olympics is 85m and the way I am training, I am hopeful that I will achieve this standard before the qualifying period ends and make my way directly to the Olympics,” he added.

Arshad will now travel to China later this month where Athletics Federation of Pakistan has arranged training program for five athletes.

“This will surely help me improve my performance,” he said. “The Athletics Federation of Pakistan is doing what they could but we lack government support. My request to the government is that other sports also deserve their attention.”

And, if support and attention is provided, Arshad hopes that cricket-mad and fast-bowling-obsessed nation can turn towards athletics as well.