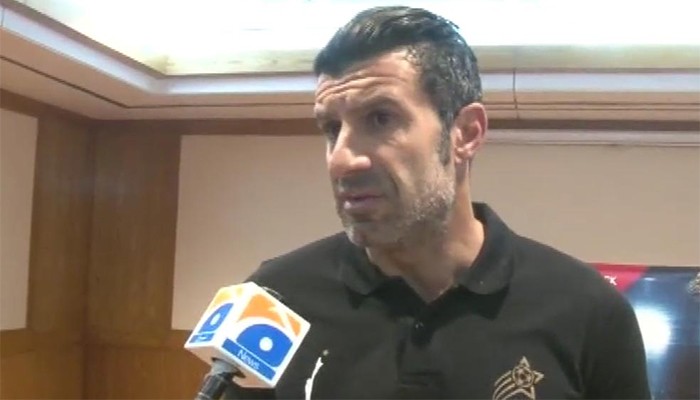 KARACHI: Former Portugal captain Luis Figo has suggested that Pakistan Football Federation (PFF) work on and invest in the grass root level to improve the standard of the sport in Pakistan.

In an exclusive chat with Geo News ahead of their twin city tour of Karachi and Lahore, the Portuguese legend deemed the development of football “a deep subject”.

“We can talk a lot about how to develop football,” he said when asked about his suggestions to improve football standards in Pakistan.

“First of all, you have to start the education [of football] in schools because in Portugal it’s a culture to play football in schools and streets,” he explained.

Figo, capped 127 times for Portugal, said that it is also important for clubs and the federation to work at the grassroots level to improve the standard of football.

The Pakistan national team, he said, can only be improved when you have done work at the base.

“You have to work with clubs at the grassroot level; you can’t build a house from the roof down. It is very important to have good coaches at that level along with good competition,” Figo said.

The former Barcelona and Real Madrid star said that league models are only of secondary importance, reiterating that good coaches and a good level of competition matter far more.

“League model depends on country and conditions, be it a national league or franchise league, but it is important to have good facilities and good competition and good coaches to help the game.

“That is not important,” he replied when asked if franchise-based leagues can be more helpful in Pakistan than a national football league.

“You have to train, you have to improve and then you compete to be better and with that, you give the conditions to national teams to chose teams at different age groups,” he said.

While cricket remains the undisputed king in Pakistan, Figo has seen enough to say that football can change that.

“Cricket is the number one sport in Pakistan, but I think there’s a big love for football as well and I think it is a place where football can grow and be the biggest sport,” he said.

The former midfielder said that he was happy to be back in Pakistan for the second time after an initial visit to promote the event.

“I am looking forward to playing here and spending good time with Pakistani people,” he said.

At the international level, he scored 32 goals for Portugal, representing his country in three European Championships and two World Cups, finishing as the runners-up at Euro 2004.

Figo also opened up about perhaps the most controversial decision of his career: moving from Barcelona to arch-rivals Real Madrid.

“Moving from Barca to Real Madrid was a difficult decision and a very important one of my career. These types of things are never easy but they are also a part of the cycle,” he said.

Uganda making most of Swetal Desai’s support in India