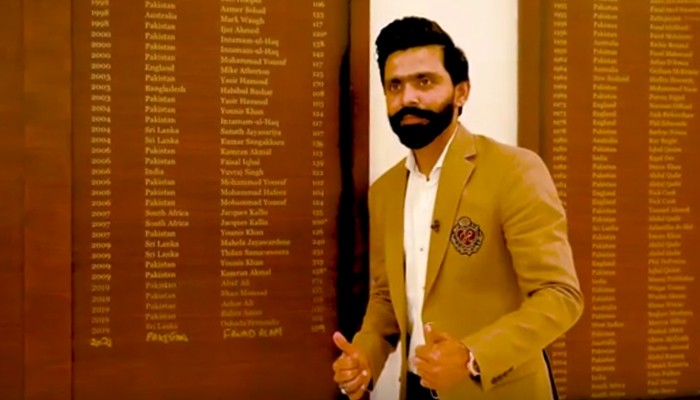 KARACHI: Pakistani cricketer Fawad Alam finally got his name etched on the PCB’s National Stadium, Karachi (NSK) Honours Board and spoke about his experience — both about the century he scored during a match against South Africa last month and how it felt seeing being listed there.

Last month, the middle-order batter had scored an “epic” fighting century — the first one on home soil — on the second day of the opening Test match against South Africa in Karachi.

I’m thankful to God that we were given us so much respect — despite experiencing so much trouble in a stage in the middle — and I hit a century.

Now, however, he has spoken up about how glad and wholesome it was to see his name on the NSK Honours Board.

“Of course, it’s like a dream come true for me. When one comes and sees this board, they think, ‘I wish my name was on this board too.’ I can’t thank God enough that my name has now been inked on this board and I pray that more names are added to it.

“And, as far as victory is concerned, cricket returned to Pakistan after ages and I hadn’t played in Pakistan — the three Test matches I played were abroad — so this was kind of like my debut in Pakistan and a comeback.

Fawad said he “felt very happy”. He explained how cricketers knew that their performance should be such that it helps their team win. “I’m thankful to God that we were given so much respect — despite experiencing so much trouble at a stage in the middle — and I hit a century.”

Noting that it was “a team effort”, he said it was “evident that we stood strong and everyone fulfilled their responsibilities and we won as a team”.

“It was a fantastic victory and it helped us in the next Test [match],” the cricketer added.

Fawad’s Jan 27 century was his third one during a Test match and came during the 14th innings of his career. Alam held fort on 63 as Pakistan reached 178 for six at tea, trailing South Africa’s first innings total by 42 runs.

Playing his first Test at home, Alam was rock-solid as he added 94 with former skipper Azhar Ali for the fifth wicket, leaving South Africa without a scalp in the first session.