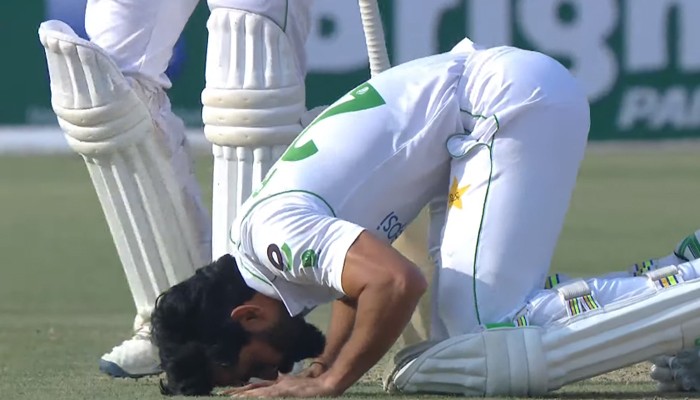 KARACHI: Continuing to set an example of “never giving up”, Pakistan’s middle-order batsman Fawad Alam scored another Test century on Wednesday, his second since making a comeback to the national squad after a prolonged gap of 11 years.

Alam brought up his century by smashing a six at mid-on off Keshav Maharaj in the 90th over of the innings.

This was Alam’s third century in his 14th inning — the only Pakistani player to score his third Test century in fewer innings than Alam was Azhar Mahmood, who scored his third in the 10th inning.

Interestingly, Alam is also the first Pakistani batsman who has converted the first three career fifties into hundreds — all in three different decades.

The 35-year old batsman from Karachi had made his debut during Pakistan’s tour to Sri Lanka in 2009 where he scored a century on debut; however, he was dropped after being allowed to play only three Tests.

He made his comeback last year during Pakistan’s tour to England and was retained for the tour of New Zealand where he scored almost a match-saving century for the country.

The century against South Africa in Karachi on Wednesday is also his 38th First-Class century, and the 11th with the red-ball.

He has scored 12,962 runs in his First-Class career and only 509 of them came in Test cricket which shows how the batsman was repeatedly ignored by selectors in the past.

Share
Previous SC should take notice of Maryam’s allegation against ex-judge: Awan
Next FKA Twigs opens up about the ordeal of going through racist abuse online

Geo.tv/Author PCB seeks written guarantee from the ICC for the players’ visas ahead of the …