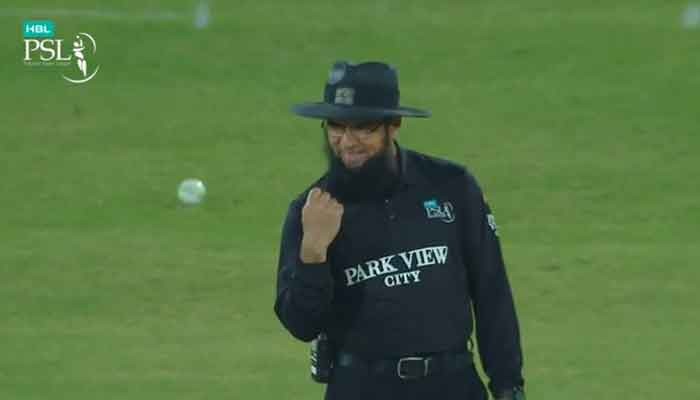 KARACHI: Aleem Dar, arguably the best umpire around at the moment, doesn’t get many decisions wrong. During Wednesday’s T20 clash between Karachi Kings and Islamabad United, Dar’s reaction to the third umpire upholding his decision went viral on social media.

The match ended when the final run was taken by the Islamabad United batsman. However, just as the two-time champions were getting ready to celebrate, Kings skipper Imad Wasim appealed against Aleem Dar’s decision to give the batsman not out.

However, the match came to an end when the third umpire upheld Dar’s decision and ruled the batsman not out, much to the joy of the umpire.

In a spontaneous burst of joy, Dar pumped his fist into the air before signalling that Imad’s appeal had been rejected.

Netizens picked up on the celebration and exclaimed happiness over Dar’s little jubilation move.

One person referred to it as a “Thug Life” moment for the umpire.

A netizen jokingly suggested the move was Dar’s way of showing his support for Islamabad United.

Pari Gul Tareen may have said it all.

United had successfully chased the target of 197 set by Kings with the loss of 5 wickets and five balls to spare.

While Islamabad United remarkably reached the big total without any of their batsmen reaching the half-century mark, the Karachi Kings innings included a century by Sharjeel Khan and a half century by Babar Azam.

The Kings’ duo scored 176 runs for the first wicket partnership. The highest partnership for any wicket in history of PSL.

The previous record also involved Babar Azam when he scored 157 for the first wicket partnership with Liam Livingstone against Multan Sultans in 2019.

This was the seventh century stand in PSL involving Babar Azam making him the player with most century partnership contributor in PSL.

Sharjeel Khan’s century, 105 off 59, was the ninth hundred to be scored in the PSL history. It was also his second century of the PSL. He had earlier scored 117 in inaugural edition of PSL, representing Islamabad United.

He is the only player after Kamran Akmal to score more than one century. Kamran has scored 3, Sharjeel has 2 scores of three figures in the tournament. The other centurions of tournament include Colin Ingram, Cameron Delport, Rilee Rossouw and Chris Lynn.

Interestingly, it was the 22nd toss win by Islamabad and they have opted to bowl first in each occasion and have made 18 successful chases, till date.