Breaking News
Home / News / World not openly speaking out on Kashmir due to economic, other interests: FM Qureshi

World not openly speaking out on Kashmir due to economic, other interests: FM Qureshi 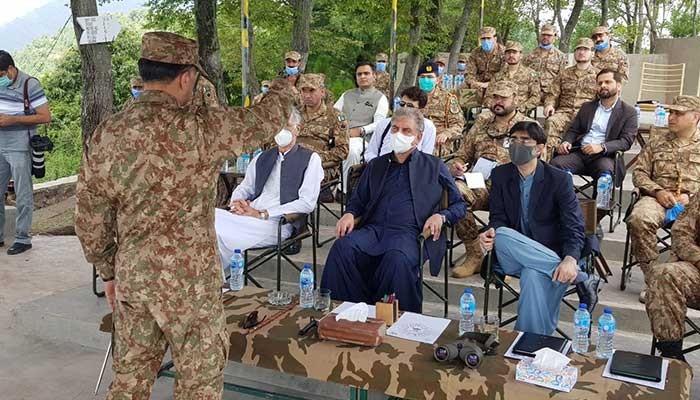 ‏MUZAFFARABAD: Foreign Minister Shah Mahmood Qureshi Monday said that the world was not openly speaking out on the occupied Kashmir issue due to economic and other interests it shared with India.

He said that Indian forces deployed along the Line of Control (LoC) have been targeting innocent Kashmiris and the evidence of that were the wounded sitting right in front of them.

The foreign minister made the remarks while speaking to the media at the LoC along with Defence Minister Pervez Khattak and Special Assistant to the Prime Minister on National Security, Dr Moeed Yusuf as the country marks the first anniversary of the Indian revocation of the special status of occupied Kashmir.

“I laud your efforts and God willing, victory will be yours,” he said.

The foreign minister added that Kashmiris have rejected India’s August 5 move unanimously and that the world was not raising the issue or speaking about it due to their economic and other interests.

Qureshi said the people of Indian Occupied Kashmir are not alone in their just struggle for the right to self-determination.

“The people of Pakistan will raise voice and flags in support of oppressed Kashmiri people on Wednesday.”

He said this struggle will continue until the Kashmiris get their right to self-determination as promised to them by the UN Security Council resolutions.

The foreign minister regretted that the Kashmiris were not allowed to offer Eid-ul-Adha prayers and sacrifice animals.

He said the implementation has been started on the action plan to protect the people of Azad Kashmir from the Indian ceasefire violations.

Pakistan proud of its soldiers deployed at LoC: FM Qureshi

Earlier, on arrival at the LoC, Qureshi had said the entire country was proud of its soldiers deployed at the LoC.

The foreign minister visited Muzaffarabad where he met the political leadership of Azad Jammu and Kashmir.

Qureshi in a video message had said that Pakistan stands with Kashmiris. “Innocent Kashmiris are targeted by Indian forces every day at the LoC as New Delhi keeps violating the ceasefire pact between the two countries,” he said.

The foreign minister had added that the people of Kashmir will continue their struggle until they get their right to self-determination.

Earlier, while departing for the visit to LoC, Qureshi in a video message had said that Pakistan stands with Kashmiris. “Innocent Kashmiris are targeted by Indian forces every day at the LoC as New Delhi keeps violating the ceasefire pact between the two countries,” he said.

“The Kashmiri people have rejected India’s illegal’s move on August 5, 2019,” he noted.

The foreign minister had added that the people of Kashmir will continue their struggle until they get their right to self-determination.

The politician, who has been illegally detained since last year when Indian revoked Article 370 of the Indian constitution that guaranteed autonomy to IoJK, took to Twitter to slam India’s heightened security measures ahead of the one-year anniversary of the August 5 move.

“Suddenly, there is heightened security and surveillance in the valley. Not like non discriminatory COVID virus will be more active in the days approaching 5th August so clearly this is being done to ensure that anger and frustration felt by people here remain hidden,” her account tweeted.

“Ms Mehbooba Mufti, former Chief Minister J&K to whom this twitter handle belongs has been detained since 5th August 2019 without access to the account. This handle is now operated by myself, Iltija daughter of Ms Mufti with due authorisation,” reads the tweet from September 2019.

Source Link: World not openly speaking out on Kashmir due to economic, other interests: FM Qureshi