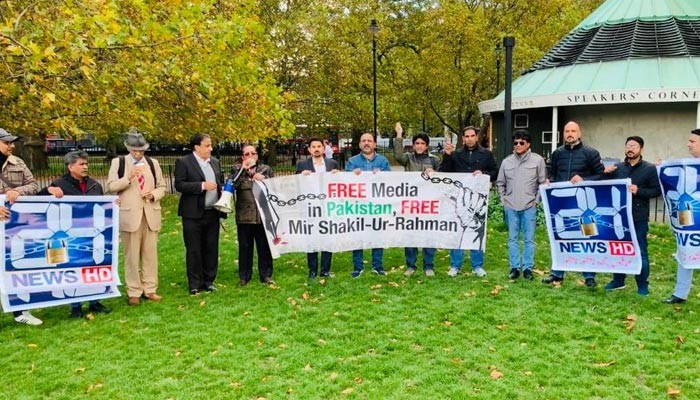 The protest which was attended by various Pakistani journalists and a UK councillor, among other human rights activists, was held at the iconic Speaker’s Corner in Hyde Park.

Speaking to Geo News, Mushtaq Lasharie, who is the Honorary Alderman of the Royal Borough of Kensington and Chelsea, said: “We are here at Speaker’s Corner to highlight the importance of freedom of speech. I want to tell the rulers of Pakistan that this country has never accepted unnecessary curbs on journalism.

Lasharie further stated that Pakistan and the Jang group were incomplete without each other, and if one was attacked, the existence of the other would eventually face vulnerability.

Journalists raised slogans calling for a free press in Pakistan and collectively rejected the unnecessary curbs on Pakistani journalists and news outlets.

Protestors demanded Mir Shakil-ur-Rahman’s immediate release, who is in the National Accountability Bureau’s illegal custody for over 200 days in a 34-year-old property case. Despite the anti-graft watchdog being unable to prove wrongdoing in the case, MSR has been unable to get bail.

The President of Pakistan Press Club in the UK, Shaukat Dar said: “It has been 6-7 months since Mir Shakil-ur-Rahman’s illegal confinement. This has angered the global journalism community. If the police of Pakistan can stand by their Inspector General, then we journalists will also stand by our colleagues.

“Right now, all journalists of Pakistan are holding protests and are demanding the immediate release of Mir Shakil-ur-Rahman.”

Another senior journalist, present on the occasion, said: “We belong to a democracy, and we want our colleagues in Pakistan to enjoy these freedoms as well. We demand the government of Pakistan to allow the media to operate freely and false cases against journalists, including the case regarding Mir Shakil-ur-Rahman, should be immediately withdrawn.”

Journalists who spoke at the protest gathering said MSR is a journalist before being a media entrepreneur and that he is responsible for running the largest media group in Pakistan.

They said MSR’s detention for nearly eight months is an indictment of the current government and its policies towards media.

Speaking further about the hurdles to freedom of speech in Pakistan, the protesters lamented that thousands of journalists lost their jobs in the last two years alone.

Previously, the South Asia Democracy Watch wrote to The White House, the Secretary of State, and members of the Senate and House members of the Foreign Relations Committee, to condemn the illegal confinement of the Jang/Geo group Editor-in-Chief.

The US State Department, the European Union, and the German government have also raised the question as to why Mir Shakil-ur-Rahman has been arrested without being charged.

Mir Shakil-ur-Rahman’s arrest has also caused an outcry in Pakistan as well as in international forums. Reporters without Borders and the Committee to Protect Journalists have termed this arrest an attack on press freedom in Pakistan.

This year, Pakistan fell three spots in the Global Press Freedom Index, from 142 to 145 out of 180 countries.

Share
Previous The Infodemic: Dr. Fauci Didn’t Write Paper Blaming Most Spanish Flu Deaths on Masks | Voice of America
Next Disha Patani shows off grace in self makeup as she shares new snap