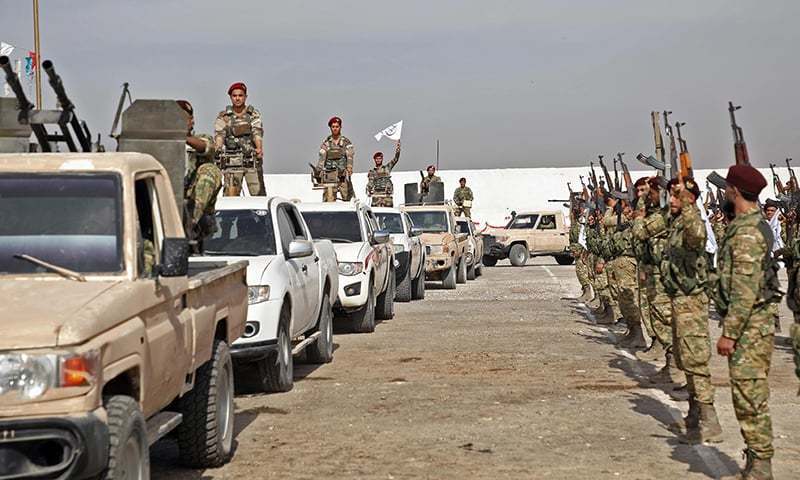 The special investigative unit was established by members of the Organisation for the Prohibition of Chemical Weapons (OPCW) in 2018 to identify perpetrators of illegal attacks. Until now the OPCW had only been authorised to say whether chemical attacks occurred, not who perpetrated them.

Officials in the government of Syrian President Bashar al-Assad and its military backer Russia have repeatedly denied using chemical weapons and accuse insurgents of staging attacks to implicate Syrian forces.

Syria’s mission to the United Nations in New York did not immediately respond to a request for comment, while there was no immediate reaction from Damascus to the report.

The OPCW Investigation and Identification Team (IIT), the formation of which was opposed by Moscow and Damascus, said more than 100 people were affected by the attacks, carried out on March 24, 25 and 30 in 2017 in the town of Ltamenah.

“As the investigation progressed, and various hypotheses were considered, the IIT gradually came to these conclusions as the only ones that could reasonably be reached from the information obtained, taken as a whole,” the report said.

The 50th Brigade of the 22nd Air Division of the Syrian Air Force dropped M4000 aerial bombs containing sarin on the town and a cylinder containing chlorine on a hospital, it said. The raids were conducted from the Sharat and Hama air bases, it said.

“Military operations of such a strategic nature as these three attacks only occur pursuant to orders from the highest levels of the Syrian Arab Armed Forces,” it said.

While individuals were identified by the OPCW investigators, their names have been redacted from the report, which was to be circulated to the OPCW’s 193 member states on Wednesday.

“There are reasonable grounds to believe that the perpetrators … were individuals belonging to the Syrian Arab Air Force,” OPCW team leader Santiago Onate-Laborde said.

The OPCW’s identification team is not a judicial body and it will be up to the OPCW’s members, the UN Secretary General and the international community to “take any further action they deem appropriate and necessary”, OPCW chief Fernando Arias said.

An attack on the Syrian town of Douma led US President Donald Trump to carry out missile strikes on Syrian government targets in April 2018 with the backing of France and Britain.

Created in 1997, the OPCW was initially a technical body to enforce a global non-proliferation treaty, but it has become the focus of diplomatic conflict between Syria and Russia on one side and the United States, France and Britain on the other.