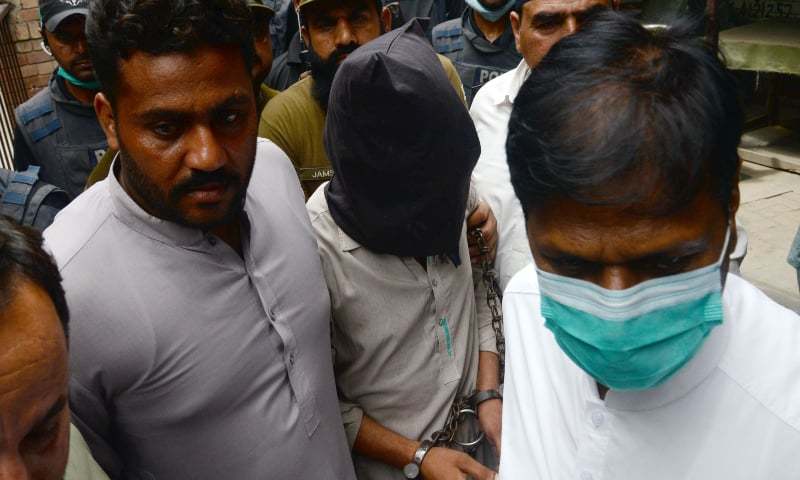 An anti-terrorism court (ATC) in Lahore on Tuesday sent a suspect in the motorway gang-rape case to jail on a 14-day judicial remand.

Shafqat Ali alias Bagga, whose arrest was announced by Punjab Chief Minister Usman Buzdar on Monday as a breakthrough in the case, was brought to the court by Gujjarpura police in an armoured vehicle and presented before the judge with his face covered.

Judge Arshad Hussain Bhutta also approved a request by the prosecution to hold an identity parade of the suspect.

The investigation officer of the case, Inspector Zulfiqar, presented the suspect’s record and sought his judicial remand for 14 days, saying an identity parade of Shafqat needed to be held. He told the court that the suspect’s DNA had matched with the samples collected from the crime scene.

While approving the plea, the judge directed police to make “special arrangements” for the suspect’s identity parade to be held as soon as possible, and ensure that he does not mingle with other suspects.

Police were ordered to present the suspect before the court again on September 29.

During the hearing, Judge Bhutta asked the suspect whether he had anything to say. “Have mercy, please […] release me,” Shafqat responded.

The judge told him that his DNA had matched the samples, saying: “You will be let go if you didn’t do anything.”

On Wednesday night, two robbers on the Lahore-Sialkot motorway had gang-raped a mother of two in front of her children in an area falling within the Gujjarpura police jurisdiction. The incident caused a countrywide outpouring of anger and brought sexual violence against women into national focus.

Shafqat was arrested after the Counter-Terrorism Department (CTD) of Police raided a house in Okara district. He confessed to the crime before his DNA matched the samples collected from the crime scene, Dawn learnt on Monday.

The suspect was apprehended following technical and human intelligence that led the department to his whereabouts. Acting on a tip-off, a CTD team questioned several persons from Lahore to Sheikhupura and then in Depalpur of Okara district before they reached the suspect.

A senior officer told Dawn that the CTD carried out an intelligence-based operation (IBO) and arrested Shafqat from his sister’s house in Depalpur late Sunday night. He said the other prime suspect, Abid Ali, who was still at large, had called Shafqat many times before and after committing the rape.

During interrogation, Shafqat told detectives that Abid had first raped the woman and then asked him to commit the offence while threatening him that he would shoot him (Shafqat) for not committing the crime or showing sympathy for the victim.

As they had just raped the woman, they noticed the personnel of the Dolphin Squad reaching the spot, the official said. As soon as a Dolphin official fired a warning shot into the air, both the suspects fled the scene and hid in a nearby jungle of Karol Ghati for two hours or so to avoid arrest. Then they left the place and reached Sheikhupura at the home of Abid Ali at Ghazi Kot, Qila Sattar Shah, in tehsil Ferozewala of Sheikhupura district. Abid had purchased this two-marla house some three years back.

Both Abid and Shafqat turned their mobile phones off. Shafqat left Abid’s house and reached Depalpur where he was employed at a cold storage. As more news of the crime appeared in the media, he preferred to stay away from his workplace and hid himself in the house of his sister who was probably unaware of his involvement in the crime, the officer informed Dawn. Abid also fled his house and went underground to avoid arrest when he came to know about the massive media coverage.

Answering a question about the presence of the suspects at the same place where the victim and her kids were awaiting help on the Lahore-Sialkot motorway, Shafqat said it was a gang of four hardened criminals, namely Abid Ali, Ali Sher, Iqbal alias Bala and himself, who used to commit crimes in Sheikhupura and other cities.

“Abid and Ali Sher were arrested by the Factory Area police of Sheikhupura probably on Aug 8 this year when they robbed a citizen while their third accomplice, Shafqat, had fled the scene,” the official said. Of them, Abid managed to secure release on bail from a local court while Sher was still in jail. The fourth accomplice, Iqbal, was living at Karol Ghati (near the gang-rape site), he said, adding that Abid had suggested to them that as they were on the radar of the Sheikhupura police, they should change the area of crime and decided to rob people near Karol Ghati. For this, Abid and Shafqat reached the same place on the day they assaulted the woman.

The officer said that as per the plan, Abid and Shafqat called Iqbal to reach the place but he refused to join them on account of some family commitment. As both were looking for their prey, Abid spotted a car with hazard lights on and the woman along with her children in it. They both reached the woman and as Abid was a habitual rapist, he along with Shafqat gang-raped her, the officer said.

Officials of the Punjab Forensic Science Agency (PFSA) also confirmed to Dawn that Shafqat’s DNA had matched with that of the victim.

Share
Previous COVID-19: That’s the spirit, No pay cuts in salaries at MCA!
Next Turkish actor Cavit Çetin of ‘Ertugrul’ fame to arrive in Pakistan today

Britain is at a tipping point on Covid-19, health minister Matt Hancock said on Sunday, …