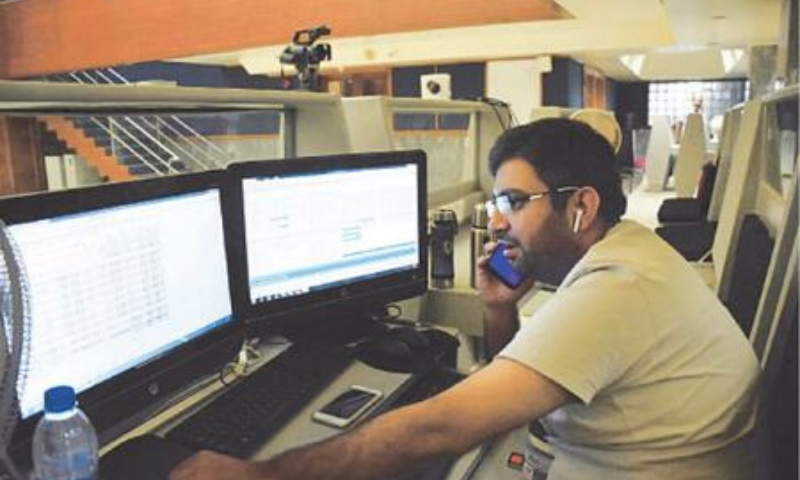 KARACHI: The early mor­ning terrorist attack on the Pakistan Stock Exchan­­ge (PSX) in the country’s commercial hub could not un­­­ruffle investors who ref­used to be distracted by the gunfire outside. For a moment due to early commotion, some nervous participants started to sell-off and quit which pulled the index down to intraday low by 220 points.

But those who maintained their sangfroid took it as an opportunity to buy blue chips at attractive levels. The market closed at its usual time with the KSE-100 index recording gains of 242 points (0.71 per cent) and settled at 34,181.80.

The index took a turn to the north as the law enforcement agencies in collaboration with the PSX security guards quickly neutralised the last of the four gunmen who only managed to reach the compound. The benchmark hit the intraday high by 267 points.

PSX Chairman Suleiman Mehdi, who coordinated in eliminating the attackers, expressed appreciation for the security agencies’ rapid response that foiled the terrorists’ attempt to enter the multi-storeyed building. “During the whole episode, the trading at the exchange continued without a minute’s interruption as brokers, traders and the staff showed no signs of panic and went about their job,” he proudly said.

Investor interest in the equities was underpinned by the slashing of the 100 basis points policy rate cut by the State Bank of Pakistan (SBP) to 7pc last week.

“Tracing from a lower inflation outlook of 6.5pc by SBP in FY21, results of recent auctions of government securities and decline in large-scale manufacturing amid the pandemic, the decision is in line with market expectations,” an analyst said. The cumulative reduction of 625bps in three months was primarily to counter the negative impact of Covid-19 on economic activities and businesses.

The cyclicals, cement and steel, were major beneficiaries of the rate cut due to their higher leveraged positions. Buying activity was observed in banks, cement and oil and gas marketing companies (O&GMCs).

Another major gainer was the oil marketing sector as the government raised the price of petrol by Rs25.58 per litre in line with stren­gthening international rates.

Investors’ interest was also seen in the auto sector where Pak Suzuki closed at its respective upper circuit. An important event during the day was the presentation of the Federal Budget 2021 in the National Assembly, which finally received approval, set­­t­ing market’s concerns at rest.

In the heavyweight exploration and production (E&P), Pakistan Oilfields closed in the negative trajectory wher­e­as Oil and Gas Dev­­elopment Company (OGDC) and Pakis­tan Petro­leum finished in the green zone. Moreover, mixed sentiment was seen in fertiliser where Engro Cor­poration ended with gains.

India recorded its highest singe-day spike of coronavirus cases on Saturday, with over 22,000 new …