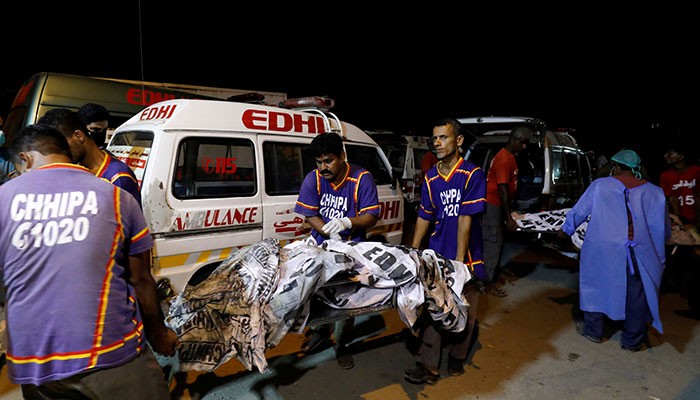 Sindh Health Minister Azra Pechuho on Saturday said that DNA tests of victims of the PIA plane crash — which occurred a day earlier and to which 97 souls were lost — will be conducted at a Karachi University lab, calling it a state of the art facility.

Dr Pechuho said that Sindh Governor Imran Ismail is “unaware of matters pertaining to DNA tests”, adding that the tests will be done in Sindh.

The provincial health minister said that the DNA tests will take 21 days and so far, 47 families have submitted their samples.

She said that 97 people died in the crash, adding that 68 men, 26 women, and three children were among those who died.

Of the deceased, the bodies of 66 are at Jinnah Postgraduate Medical Centre (JPMC) and 31 are at the Civil Hospital in Karachi. So far, 19 bodies have been identified.

Samples from all 97 bodies have been collected.

Dr Pechuho said that one wounded is at the Civil Hospital while another is at Darul Sehat Hospital.

Barrister Murtaza Wahab said that six residents of Model Colony were wounded during the incident, while 16 people were shifted to a local hotel.

The Sindh government spokesman said that ten cars and three motorcycles were also damaged in the incident.

He said that the moral and legal responsibility of the crash lies with PIA, and after determining the extent of loss, the airline should provide compensation.

Earlier in the day, forensic teams from the Punjab Forensic Science Agency arrived in Karachi to collect DNA samples from the victims of the crashed aircraft.

He said the teams will collect samples from the bodies and the victims’ parents, siblings or children to cross match and identify the victims.

“As soon as the samples reach Lahore, we will work day and night to get the result out as soon as possible. The result of the DNA tests will be available in 24 hours,” he said.

PIA plane crash: No survivors except 2 as rescuers finish accounting for passengers

Meanwhile, PIA Spokesperson Abdullah Khan said that the process of identification and handing over bodies to the families is underway.

Abdullah Khan said that according to the PIA laws, the families will get Rs500,000 in compensation.

The spokesman said that the airline’s district managers will visit the homes of crash victims and pay for the burial process.

PM Imran Khan issued special directives under which one million rupees per deceased person will be given to the heirs of the victims.

Share
Previous Zero cases in China as virus surges in Latin America, India – World
Next Kevin Hart reveals why his wife didn’t dump him after he was caught cheating on her