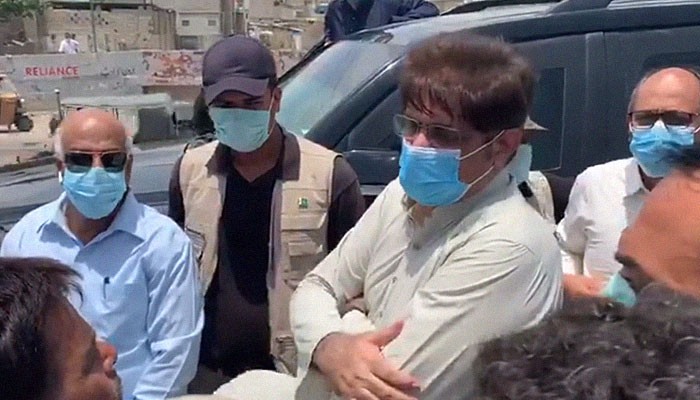 KARACHI: Sindh Chief Minister Murad Ali Shah said Monday reports of Pakistan’s financial capital being given under the federation’s control were merely a “bubble of hot air and would fizzle out itself”.

Shah was visiting different districts of the city to inspect removal of animal waste after Eid-ul-Adha and ongoing cleaning work at nullahs. He was accompanied by Education Minister Saeed Ghani, Local Government Minister Nasir Shah and his advisor, Senator Murtaza Wahab.

Addressing a journalist’s question about the reports pertaining to Karachi, Shah said such comments were made by “politically immature” people and political “orphans”.

The journalist had asked the chief minister about his thoughts on the statements from a federal minister and some other responsible individuals that Karachi would be made a federally-administered territory under Article 149 of the Constitution of Pakistan.

Advising the media not to take politically immature and political orphans seriously, the chief minister added that such statements were beyond comprehension.

“Yes, the nullahs are being cleaned every year but, due to encroachment issues, some of the portions of nullahs are always leftover from cleaning; therefore, they get choked during heavy rains,” he said while responding to a question.

“I am telling the people loudly that the World Bank has not released funds so far and whatever funds are being utilised have been released by our government from its own resources,” he said, adding that he would redress all the major drainage and infrastructure issues in consultation with the Karachi Metropolitan Corporation (KMC) and Karachi Development Authority (KDA).

The chief minister visited the offal dumping site in Qayyumabad where a proper camp was set up to record the weight of offal being brought there.

Briefing the chief minister, MD Sindh Solid Waste Management Board, Kashif Gulzar said that up to August 2, over 31050 tons of offals have been lifted from six districts the city, including 7892 from South, 9351 East, 3738 Malir, 5918 West and 4151 from Korangi while the figure of the District Central was yet to be compiled.

The chief minister was told that 85 offal collection points have been set up all over the city from where they were being dumped at Gondpas, Jam Chakro, near Sharafi Goth, and Korangi Crossing.

The chief minister, just after visiting Qayyumabad, went to Mehmoodabad Nullah known as Zahri House Nullah, at Shahrae Faisal where a major choking point was dug up to clear it.

PD SWEEP Zubair Channa told the chief minister that the Mehmoodabad Nullah coming from Tipu Sultan Road was clear but it has a serious choking point under Shahrahe Faisal Road. The chief minister examined the portion of the nullah and noticed that its design was in a zigzag shape. “This zigzag nullah under the road will always remain to be a problematic point, therefore a straight crossing should be constructed under the road along the existing zigzag culvert,” he said and directed the officials to reconstruct it accordingly.

When Murad Ali Shah reached Gujar Nullah at Liaquatabad No. 4, people of the area gathered and told him that rainwater had choked the nullah, as a result, the rainwater mixed with sewage gushed into their streets and house. The chief minister directed the municipal commissioner to clear their homes and report him.

Source Link: Sindh CM says talks of Karachi being given to federation’s control ‘would fizzle out’