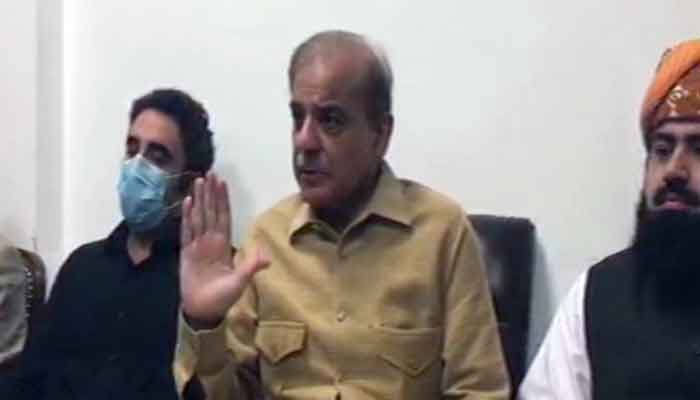 The opposition staged a walkout in protest after most of their proposed amendments to the bills were rejected and they were not allowed to speak.

“Asad Qaiser did not allow a debate to take place on our proposed amendments [to the bills],” said Shehbaz, flanked by PPP Chairman Bilawal Bhutto Zardari and other opposition parliamentarians.

Shehbaz said that “genuine amendments” to the bills were not entertained, adding that he would register a strong protest against the speaker of the national assembly for not letting him speak.

“I even went to [the place] where the speaker sits with his staff and requested him to let me speak. Neither did he respond to me nor did he allow me to speak, which I think is a very unparliamentary attitude,” he said.

The former Punjab chief minister said it was a “Black Day” in the history of the parliament owing to the way the opposition was treated, adding that the opposition will decide mutually on what action to take against the speaker.

Dispelling the impression that the opposition parties wanted a National Reconciliation Order (NRO), Shehbaz said that leaders Rana Sanaullah, former prime minister Shahid Khaqan Abbasi and PPP’s Khursheed Shah were already being targeted by the National Accountability Bureau (NAB) and were fighting the cases registered against themselves bravely.

Not speaker’s right to stop leader of the opposition from speaking, says Bilawal

Addressing the press conference after Shehbaz, Bilawal criticised the speaker as well for not allowing the leader of the opposition in the national assembly to speak.

Bilawal said that senior opposition leaders, who had also been lawmakers in the parliaments during the Musharraf and Zia ul Haq eras, said they had never seen such non-democratic practices take place before.

“After the Islamabad High Court’s decision, legislation cannot be presented by an advisor,” he said, regretting that the speaker was not “ready to listen to this argument”.

Referring to the government’s amendments to the Anti-Money Laundering Bill, the PPP chairman said that now, police did not need a warrant to arrest anyone.

Bilawal said that the opposition was already bearing the brunt of the NAB’s coercive tactics, adding that these new amendments would have an adverse impact on the country’s business community and as a result, on the economy.

The controversy began after today’s joint sitting of the parliament during which amendments in three bills crucial to the fulfillment of the Financial Action Task Force’s (FATF) requirements were passed.

The opposition staged a walk out in protest after most of their proposed amendments to the bills were rejected and they were not allowed to speak.