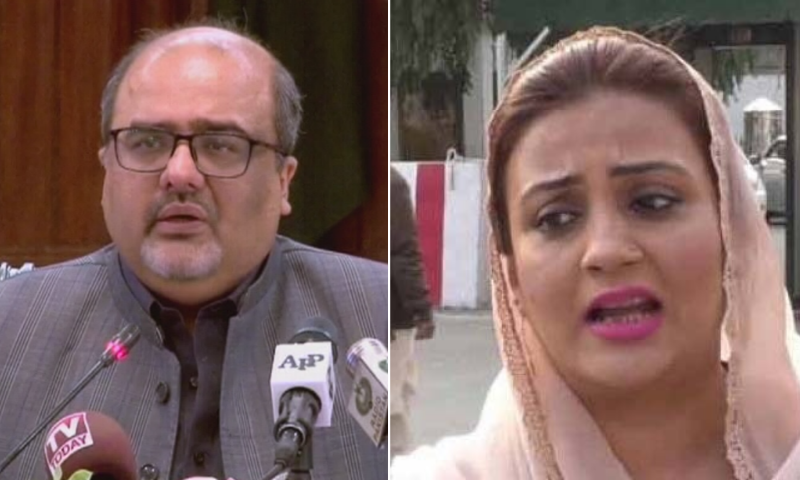 Adviser to the Prime Minister on Interior and Accountability Mirza Shahzad Akbar said on Thursday he had served a legal notice to PML-N leader Uzma Bukhari for “pass(ing) defamatory statements and rais(ing) false and absurd imputations” against him in a television show.

According to the notice dated January 13, which Akbar posted on Twitter, Bukhari had appeared on a show called Faisla Ap Ka aired on Aaj TV on Wednesday night where she passed “completely untrue and libelous defamatory statements” accusing the premier’s adviser of demanding a kickback from Broadsheet LLC owner Kaveh Moussavi.

Bukhari was referring to a recent interview of Moussavi where he accused PML-N supremo Nawaz Sharif of offering him a bribe in 2012 to drop a corruption probe against him.

“Moussavi said Shahzad Akbar along with another person came to him (Moussavi) and [both] were asking for their cut,” the notice quoted Bukhari as saying. “This is a very important thing. They asked for a cut for themselves, not the government. They said ‘what will [you] give us? We will extend your contract’. This is a very big allegation […] for a government office-bearer who is with the government.

“Shahzad Akbar’s history of taking and giving briefcase is old […] and this is not an allegation.”

In a recent interview, a full recording of which is available with Dawn, Moussavi had alleged that an individual who he had met with Akbar in 2018 regarding a $1 billion bank account was more interested in getting his cut than in investigating suspects. The Broadsheet owner added, however, that Akbar may not have been aware of this individual’s question about a commission.

Denying this in a statement to Dawn, Akbar clarified that he met Moussavi in 2019 twice and not in 2018. He said the context of his meetings was to negotiate the award price and to reduce the payable amount. According to Akbar, in the interview Moussavi may be referring to someone he met separately.

In the notice served to Bukhari yesterday, Akbar insisted he had been a “target of hateful media campaigns from members of the PML-N and other opposition parties” which are run in order to “discourage him from the pro-active role he is playing in curbing corruption and ensuring accountability”.

The notice said Moussavi had “stated at many occasions that [Akbar] is a man of integrity”. It added that Bukhari had levelled the allegations against Akbar in order to “sabotage the anti-corruption drive” and mislead the public.

The PM’s adviser also rejected Bukhari’s accusation that he “misappropriates public funds […] and is involved in the offence of accepting and giving bribes”. The notice also stated that Akbar had never been the prosecutor general of the National Accountability Bureau as claimed by Bukhari.

Akbar demanded Bukhari to retract her statements and issue an apology or pay Rs500 million in damages. In a tweet, Akbar said money collected in damages would go to charities.

Yesterday, the PM’s adviser had also served a notice to PML-N spokesperson Marriyum Aurangzeb for similar statements in a press talk. In a tweet, Akbar said Aurangzeb “has been asked to apologise or she will be taken to court”.

Broadsheet LLC, a UK company that was registered in the Isle of Man in the Pervez Musharraf era, helped the then government and newly established NAB track down foreign assets purchased by Pakistanis through alleged ill-gotten wealth.

Broadsheet claims that it was established to enter into an Asset Recovery Agreement dated June 20, 2000, and did so with the then president of Pakistan, through the NAB chairman, for the purposes of recovering funds and other assets fraudulently taken from the state and other institutions, including through corrupt practices, and held outside of Pakistan.

Broadsheet maintains that it was created to be a company specialising in the recovery of assets and funds, and was therefore engaged to trace, locate and transfer such items back to the state. The firm came to light earlier this month when a British court ordered that $28.7 million be paid to Broadsheet from the Pakistan High Commission in the United Kingdom.

The Broadsheet contract, signed in 2000 by Gen Muhammad Amjad, the head of NAB appointed by Gen Pervez Musharraf, maintained that the firm would receive 20 per cent of the assets recovered, with the remainder going to NAB.

The contract gave Broadsheet the authority to initiate litigation or enforcement proceedings deemed necessary to seize assets on behalf of NAB.

NAB and Broadsheet also agreed to open a bank account which would be jointly controlled by NAB and the company, and it was agreed that all assets proceeds recovered would be deposited in the account.

The agreement also stated that the contract was binding on respective successors.

A lawyer associated with the company earlier told Dawn that the Sharifs were the “top target” of the Broadsheet investigation. The contract was terminated in 2003 by NAB.

But the company secured the payment of $28.7 million from the accounts of the UK High Commission this month for the long overdue payment of its services, as enforced by a UK court. The amount was approved by the federal cabinet earlier this month.

The firm’s owner has recently made shocking allegations against the prominent politicians including former president Asif Ali Zardari, Sharifs, Gen Musharraf, an unnamed general and an unidentified individual purportedly linked to the PTI government of bribery, kickbacks and selective accountability. His remarks in an interview have created new controversies in the country.