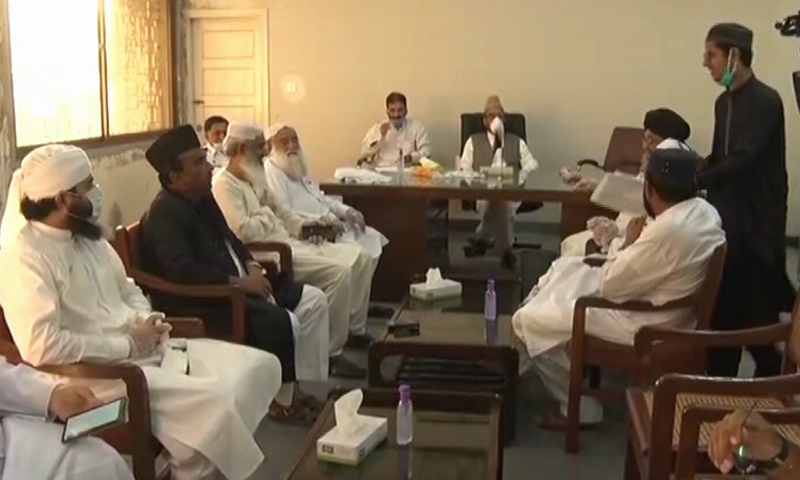 A meeting of the Central Ruet-i-Hilal Committee is underway in Karachi for sighting the moon of Shawwal, which marks the beginning of Eidul Fitr.

The meeting is being chaired by Mufti Muneebur Rehman, who will make an announcement regarding the sighting of the crescent.

Earlier in the day, Federal Minister for Science and Technology Fawad Chaudhry had said that Eidul Fitr will be celebrated in the country tomorrow (Sunday), according to calculations made by his ministry.

Addressing a news briefing in Islamabad, he said his ministry wanted to end the conflict over moon-sighting by relying on technology, adding that he rejected notions that technology should not be involved in moon-sighting.

“Islam is a religion of knowledge and intellect. Whoever says technology should not be involved in moon-sighting, we reject their perspective. When you wear glasses, this is also technology. How can you say if I see with glasses, it is halal but if I see through telescope, it is haram?” he questioned.

“[The government] is always trying to accommodate different religious groups which has resulted in empowering sectarian groups. We see that our state accommodates religious groups during the Eid conflict every year even though we should pay heed to the Constitution, law and human intelligence in some matters.

“Mufti Shahabuddin Popalzai, who heads Peshawar’s Qasim Khan Mosque, makes a different announcement, the Ruet-i-Hilal committee makes another, so we decided this year [that the science ministry] would use technology to determine when Eid should be celebrated.”

He said the ministry of science and technology had formed a committee comprising members from the space technology department, mathematicians and officials from the meteorological department, which concluded that Eidul Fitr in Pakistan will be tomorrow. He added that the committee also took opinions of ulema into consideration.

Chaudhry said his ministry had identified eight areas across the country where the moon could be seen. Explaining further, he said there was a certain waiting period after sunset for the moon to be seen.

“Saudi Arabia declares that the moon has been sighted only if they can view it a minute after the sun sets. After conferring with experts, the first principle we decided upon was that the ministry would wait for the moon to appear 38 minutes after sunset.

“The height of the moon should be 6.5 degrees and the minimum angle at which the moon can be seen should be nine degrees.”

He refuted the perception that the moon needed to be sighted to declare Eid. “This is not necessary as shown by teachings of Imam Hanbal and the religious scholar Javed Ahmed Ghamidi”.

He added that his ministry had created a mobile application — The Ruet — through which people could see the position of the moon. He added that according to the app, after sunset on Saturday evening, the moon would be visible in Sanghar, Thatta and Badin areas of Sindh between 7:36 to 8:14pm.

Chaudhry said it would be the first time that Muslim countries all over the world would celebrate Eidul Fitr on the same day.

“A very interesting and important thing is happening this time […] that the four big groups of Islamic countries, the Arab groups — Saudi Arabia, UAE and other Arab countries, Turkey, Iran and Malaysia, Indonesia and Brunei will all celebrate Eid on May 24,” he said.

“Pakistan should also celebrate Eid tomorrow,” he said, adding that it was irrelevant whether the moon was sighted or not.

“The Met office says we won’t be able to see the moon because of bad weather, that is irrelevant. Even Saudi Arabia has scrapped its Ruet committee because of the pandemic.”

Chaudhry added that although Mufti Popalzai had declared Eid on Sunday, the moon would not be visible in the area today as well.

He said his ministry had forwarded its recommendations to the Prime Minister’s Office and would follow whatever decision was taken.

‘Decision on Eid to be taken by ulema’

Meanwhile, Federal Minister for Religious Affairs and Interfaith Harmony Noorul Haq Qadri said on Saturday that the decision on Eid would be taken by ulema.

In a statement, he said that the government and people of Pakistan would celebrate Eid according to the decision taken by the Ruet-i-Hilal committee.

Qadri added that Minister for Science and Technology Fawad Chaudhry had also been included in the central committee this year.

He said “help of science and technology could be taken” but clarified that sharia relied on witnesses for moon-sighting.