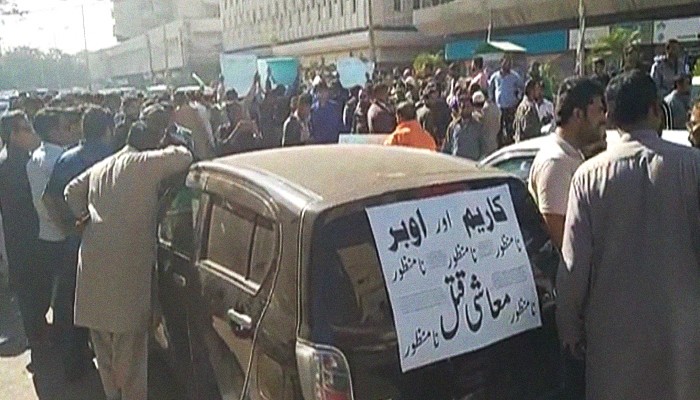 KARACHI: Drivers of various ride-hailing apps on Monday protested outside Karachi Press Club, demanding they be paid a fixed profit as opposed to variable incomes.

The drivers lamented that after paying a tax worth 15 percent, the remaining 85 percent should be divided in four portions. The protest would continue until their demands were met, they mentioned, adding that the companies’ policy teams should meet their own 10-member group and devise a suitable strategy.

In the protest outside the KPC that multiple online cab services’ drivers attended, they also demanded that a profit for them be fixed as part of their commission. They said they already paid 10 percent of their commission to cab companies and another five percent to the government of Sindh as tax.

The bonus, conditional on ratings, should also be improved, they said.

A few months earlier, ride-hailing app Uber’s drivers York went on a strike in New before the company went public to protest what they view was unfair employment conditions, as stated by a taxi union.

“Uber claims that we are independent contractors even though they set our rates and control our work day,” an NYTWA member and Uber driver had said. “Uber executives are getting rich off of our work. They should treat us with respect. We are striking to send a message that drivers will keep rising up.”

Another NYTWA member, who drove Lyft, had said: “I voted to go on strike because drivers need job security.”

Earlier this year, Uber had bought its Middle East rival, Careem, for $3.1 billion. Under the deal, Uber would own Careem as a wholly-owned subsidiary but would let it continue operating independently. The latter would also retain its branding, services, and a separate app.

The acquisition is subject to regulatory approvals and the transaction is expected to close in the first quarter of 2020.