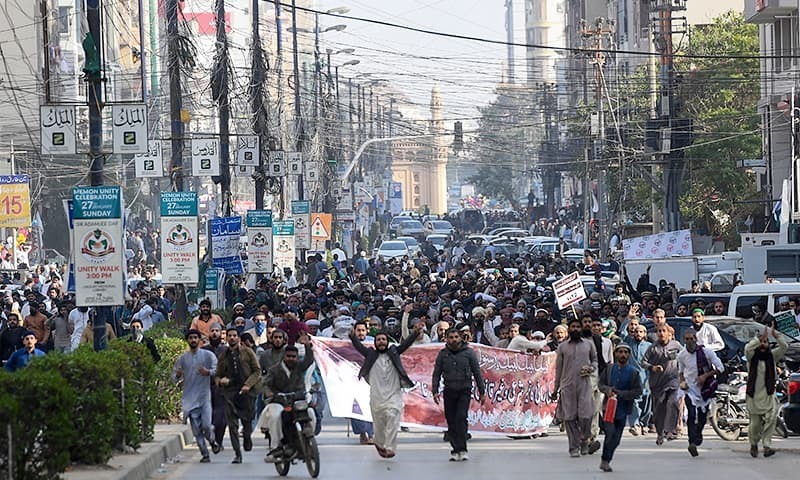 An anti-terrorism court (ATC) in Rawalpindi slapped 86 workers and supporters of the Tehreek-i-Labbaik Pakistan (TLP) with a prison sentence of 55 years each in a case pertaining to rioting and resisting against the police.

The court was hearing a case registered in the Pindighep police station against TLP workers who held violent protests and clashed with the police over the arrest of party chief Khadim Hussain Rizvi in 2018.

After the verdict was announced late on Thursday night, the convicts were escorted to Attock jail in three vehicles by Elite Force officials.

Rizvi was arrested along with other leaders of TLP as well as the Tehreek-i-Labbaik Ya Rasool Allah party in 2018 in a crackdown by security forces in Lahore. Soon after the news of his arrest spread, hundreds of activists of the two parties took to the streets and blocked many roads for traffic.

A constable was seriously injured at Multan Road where the violent activists clashed with police.

Prior to the agitation, a police officer said, hundreds of trained police commandos and personnel of the anti-riot force were dispatched to the Multan Road after the information that violent activists of the TLP had held a senior police officer — Iqbal Town SP Syed Ali — hostage along with his guards.

The arrests came months after the party held a sit-in in Islamabad against a Supreme Court verdict acquitting Aasia Bibi in a blasphemy case. However, the government had insisted that the arrests had nothing to do with the sit-in.

“The action was prompted by TLP’s refusal to withdraw its call for protest on November 25 [2018]. It’s to safeguard public life, property and order,” then information minister Fawad Chaudhry had shared on Twitter.

US Presidential Debate key takeaways: An acrid tone from the opening minute – World

Saeed Ghani, while addressing the demonstration lamented that the people are facing double jeopardy as, …