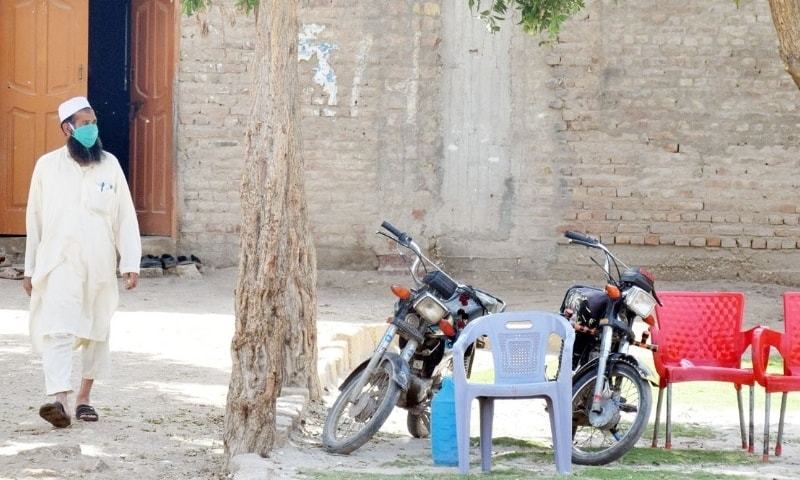 With the rising number of coronavirus cases in Sindh, residents are becoming increasingly wary of the pandemic and are taking whatever precautions deemed necessary to protect themselves and their loves ones.

Amid the worries, the presence of members of the Tableeghi Jamaat has perturbed residents, especially after reports that several attendees had tested positive for the virus after the gathering in Raiwind last month.

Two people died in Karachi on Monday after having contracted the virus at the Raiwand Ijtima, according to Sindh health ministry.

Residents of Sehrish Nagar area of Qasimabad in Hyderabad had informed police about the presence of Tableeghi Jamaat members in the local Makki Mosque. Subsequently, the members were confined inside the mosque premises and authorities said it will act as a quarantine centre for them.

“We were supposed to leave on April 1 with the resumption of normal railway traffic across Pakistan. But now we don’t know when we will be leaving the area,” a member of the 15-member Tableeghi Jamaat in Hyderabad told Dawn.

The individual had arrived from Swat to the local headquarters of the Tableegi Jamaat at Noor Mosque in Hyderabad and had been staying at Makki Mosque for a few days.

Noor Mosque is the second largest centre of the Jamaat in Sindh after the one in Karachi. Another major centre is located in Sukkur.

He said that they had arrived at Raiwind from Swat and then reached Hyderabad’s Noor Mosque for formation of their jamaat from where they went to Sehrish Nagar for preaching of Islamic teachings. They are currently in Makki Mosque in Sehrish Nagar.

The development comes as various individuals tested positive for the coronavirus after they had gathered for the Tableeghi Jamaat congregation in Raiwind — comprising tens of thousands of people — held from March 11 to 15 near Lahore.

Even though the fast spread of coronavirus in Pakistan had become a known fact at that point, the Raiwind Ijtima had gone on as planned. Punjab government officials had said at the time that all their “pleas” for postponing the congregation in view of the threat of Covid-19 spread had been rejected by the organisers.

Three policemen deployed at Makki Mosque in Hyderabad are required to ensure that no one enters or exits the mosque premises.

“No one is coming to the mosque from the locality ever since we were deployed here,” said one of the policemen.

According to a local resident of the area, Fayaz Chandio, initially seven members of the Tableeghi Jamaat had arrived at Makki Mosque from the local headquarters at Noor Mosque. Following this, another eight individuals reached the mosque to join them.

Chandio said that locals had informed police about their presence after a 19-year-old Chinese-origin member of the Tableeghi Jamaat — staying at Noor Mosque — tested positive for the coronavirus on Friday.

The Chinese national is under treatment in an isolation ward set up at the Liaquat University Hospital (LUH) city branch.

Health officials also shifted 19 suspected cases who might have remained in contact with the coronavirus-positive patient to Kohsar Latifabad quarantine facility and sent samples of eight of them to the laboratory before sealing off the Noor Mosque. One of the eight tested positive earlier on Sunday, according to Kohsar Hospital in-charge, Dr Suresh.

“We had to deploy police there after confirmation of the Chinese national’s test. We are told that around 210 people are staying at Noor Mosque as per their routine schedule for preaching purposes,” said Hyderabad’s senior superintendent of police (SSP) Adeel Chandio.

For his part, Haji Aslam, the local administrator of Noor Mosque, said that “all those parties [jamaats] that are present in Sindh had left the centre before this situation [coronavirus] had emerged”.

“We had already curtailed our activities inside Noor Mosque since the government’s ban,” Aslam explained, adding that “instead of offering prayers conventionally, small groups of people of four or five persons offer prayers inside the mosque while keeping some distance as advised.”

“We couldn’t even hold our weekly congregation [shab-e-juma] on the last two Thursdays,” he added.
According to Aslam, several foreigners are part of the around 200 people currently staying in Noor Mosque and all of them are being screened.

A total of 830 persons belonging to the Tableeghi Jamaat are currently in the Hyderabad range.

“Of these 830, 234 belong to Hyderabad’s Noor Mosque,” said Hyderabad range DIG Naeem Shaikh, adding that if any of the eight test positive, more people from the mosque will need to be tested.

There is a similar concern in other parts of the province.

According to DIG Mirpurkhas Zulfikar Larik, around 260 members are said to be present in 24 locations of the district. He added that they are being medically examined and so far, are asymptomatic.

Larik said that screening of others is under way and counting of numbers of such individuals in Mithi is also ongoing. In Umerkot, 93 Tableegi Jamaat members are present in 14 different locations.

According to a Larkana police officer, however, the number is nearly 300 and they were moved to Sukkur on Saturday.

“These people took the situation lightly and didn’t return. Most of them are from other provinces and inter-provincial transportation and rail traffic is already suspended,” said a senior administration officer, who asked not to be named.

He fears that in case some of them are carriers of the virus, others could contract it and spread it further.

“We don’t have enough space for quarantine and required kits for testing. We are already struggling with the care of those who had arrived or are likely to arrive from Taftan in Sukkur’s quarantine facility. So these people have become another burden and risk factor for all of us,” he said.

Meanwhile, Aslam, the administrator of Noor Mosque, says they have reached out to the local administrations in different districts to arrange transport for the members, adding that the cost would be borne by the members themselves.

Police are stopping members of Jamaat coming from other parts of the country to Sindh for preaching purposes. They are being confined in different mosques as per standard operating procedures (SOPs).

“We are trying to stop them from coming to our area. They can’t move amongst the population now,” said DIG Sukkur Fida Mastoi.

“What we are doing is that their local contact person is told to keep them in different mosques as per social distancing SOPs and then go for their screening and if anyone requires test or any test turns out to be positive, the patient will be segregated for treatment,” he added.

Share
Previous Jameela Jamil says she ‘fancies’ everyone not ‘just straight men’ | Entertainment
Next The Falcon and the Winter Soldier on Disney Plus: release date, trailer, cast and more

KARACHI: The State Bank of Pakistan (SBP) on Tuesday extended the deferment facility of principal …