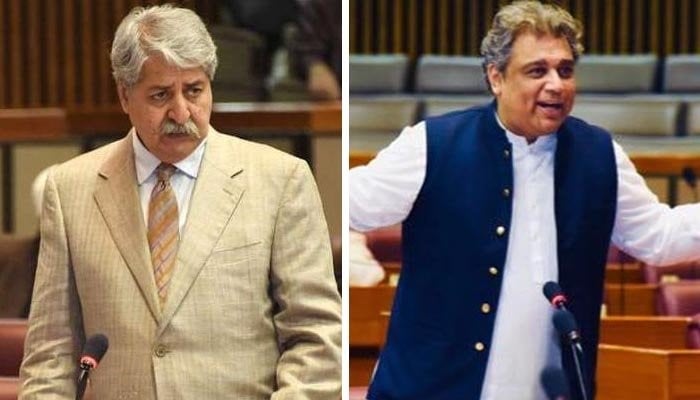 ISLAMABAD: PPP lawmaker Naveed Qamar and Minister for Maritime Affairs Ali Zaidi, of the ruling PTI, had a heated face-off during a session of the National Assembly on Tuesday after Zaidi levelled indirect accusations against the PPP.

Zaidi was supposed to speak about the supplementary grants to be approved today but he instead resorted to attacking the PPP leadership. He had also brought along with him a report by the joint investigation team (JIT) on incarcerated Lyari gang war leader Uzair Baloch and named people who were involved in the matter.

The federal minister claimed Baloch had confessed to killing 58 people on the behest of some individuals “who make speeches on budget in the National Assembly now”.

He criticised the PPP, discussed the JIT and its reports, and spoke of some findings of the JIT about the party’s leaders.

Following Zaidi’s controversial speech, a commotion ensued, with some PPP leaders present there becoming visibly angry. When it was the Karachi-based party’s turn to speak, the government’s lawmakers started chanting against them and creating chaos in the House.

Qamar, on the other hand, tried to cool down the tensions and do away with the spat — which is why NA Speaker Asad Qaiser asked him to address the assembly.

The PPP leader said the behaviour was not appropriate and that since Zaidi had spoken of Sindh lawmaker Abdul Qadir Patel, it was only right that Patel give an explanation personally.

In the video, the PPP leader is heard mentioning the Ministry of Ports and Shipping — now known as Maritime Affairs Ministry, under Zaidi. “Is it improving the honour of this house,” he asks, before losing his cool at the PTI minister.

Qamar is then seen taking off his coat and challenging Zaidi to a face-off, saying: “Alright, okay, let’s fight then! Come!”

The lawmakers were eventually made to settle down to maintain decorum of the House.