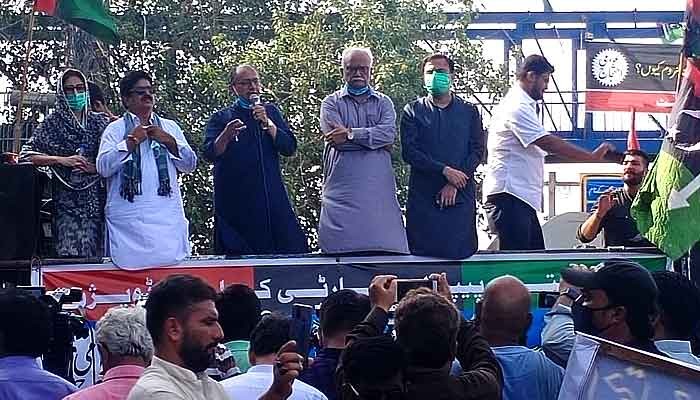 KARACHI: The PPP leaders on Tuesday hold the federal government responsible for persistent gas and electricity crises in the metropolis, alleging that the Centre is anti-Karachi, The News reported.

Addressing a protest organised by the provincial ruling party outside the head office of Sui Southern Gas Company against the massive shortage of gas and electricity in the province, they announced holding a similar demonstration at the head office of K-Electric against prolonged and recurring power failures in the city.

Sindh Education and Labour Minister Saeed Ghani, addressing the demonstration said that the energy needs of the entire country were met through the natural gas produced in Sindh.

“Despite this, our industries and households are deprived and this situation is not acceptable to us. We are responsible for Karachi as we will not remain silent anymore against this injustice,” said Ghani, who is also the PPP Karachi Chapter president.

Owing to the sheer inefficiency of the federal government, the provincial minister said that the lives of people of Karachi have simply become miserable who have to brave massive curtailment of gas and electric supply.

He lamented that the people are facing double jeopardy as, besides the shortages, the tariff of both the utilities has gone up manifold.

Noting that the federal government was violating the Constitution by denying the due amount of gas to Sindh from where it was generated and supplied to the country, he said that the incumbent prime minister was totally indifferent to the miseries of people of Karachi.

The minister also claimed that people of Karachi would vote in favour of the ruling PPP if polls were held in the city transparently.

“Karachi was ours and it will remain ours,” he claimed. Ghani announced that similar demonstrations will also be held in other towns and cities of Sindh.

A large number of workers and supporters of the PPP attended the demonstration and many of them were holding placards inscribed with slogans against the alleged apathy of the federal government towards power and gas supply woes of the people of Sindh. They also raised slogans against the natural gas shortfall in the province.

Share
Previous Elsa Hosk announces she is expecting her first baby with beau Tom Daly
Next IPL would have been a ‘big opportunity’ for Pakistani players, Shahid Afridi says