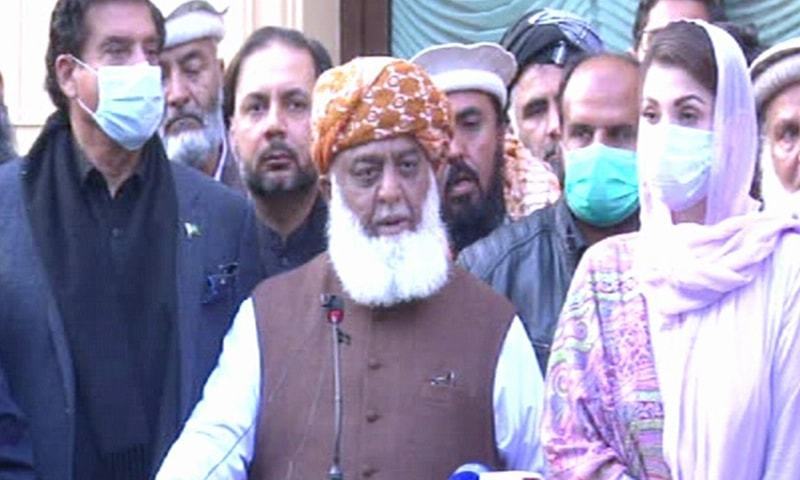 The opposition Pakistan Democratic Movement’s (PDM) scheduled march to the Election Commission of Pakistan on January 19 will be a protest and not an “attack”, the alliance’s president Maulana Fazlur Rehman said on Monday.

Speaking after a meeting of the PDM steering committee in Islamabad, Rehman said PDM members were democratic people and followed the Constitution and law. “We want freedom of democracy in the country because that is the demand of the Constitution and the law,” he added.

He said the meeting discussed the strategy for Tuesday’s protest outside the ECP and it was decided that “the PDM leadership will enthusiastically stage a protest demonstration in front of the Election Commission regarding the foreign funding case.”

He accused the premier of illegally collecting millions of rupees from around the world in the name of his party and “using them for political disruption and election rigging by bringing the money into the country through hundi and other means”.

Rehman said the foreign funding case against the ruling PTI had been pending for six years and Prime Minister Imran took “the mother of NROs” to create political instability in Pakistan and “used funds collected in the name of charity for personal business and spreading chaos, illegally and through secret accounts”.

“We will demand the ECP to immediately give a decision on the crime which has been accepted,” he said, adding that further delays were giving rise to doubts and suspicions.

Referring to former premier Nawaz Sharif, Rehman said on one hand a decision was issued against an elected prime minister within six months, while today a case was pending against a “selected” prime minister for six years. “What kind of justice is this?” he asked.