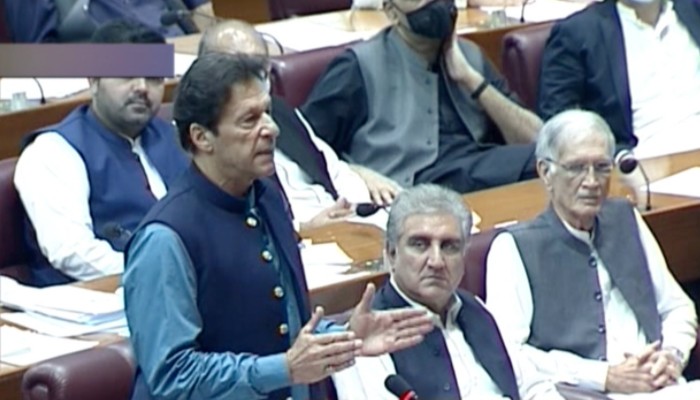 Prime Minister Imran Khan on Wednesday lambasted the opposition for their approach to the legislation required by the Financial Action Task Force, saying that their behaviour made it clear that their interests are “at odds with Pakistan’s”.

The premier was addressing a joint session of the parliament that was convened to pass bills fundamental to the fulfilment of requirements set out by the FATF.

The opposition staged a walk out amid the session as a protest for their proposed amendments to the bills not being approved and for not being given a chance to speak.

PM Imran said that the day marked an important one and the parliamentarians present in the House had demonstrated they stand with Pakistan.

“We should all know that it wasn’t during our government we fell under FATF’s scrutiny and were put in the grey list. We inherited this problem [from past governments],” the premier said.

He said that blacklisting would mean sanctions and being cut off from other countries.

“A country already facing a depletion in foreign exchange reserves will see pressure on its currency.

“The fallen rupee will see a rise in prices on imports, including oil and then input costs such as electricity, petrol, diesel and transport will rise — this all leads to a rise in poverty,” PM Imran said.

Citing the government’s “success in emerging from the COVID crisis”, he said even World Health Organisation is asking others to “learn from us”.

“I was hoping the opposition will thank us for bringing the country out of the difficult time […] in a democracy, the opposition has a great role, because they represent the public and safeguard their interests,” PM Imran said.

“But when I saw the opposition’s attitude, the way they approached the FATF legislation, whatever my views had always been about them proved true,” said the premier.

He said he thought the opposition will work together with the government because it is in Pakistan’s interest. “Not only did they not thank us, but I was likened to Modi and his lockdown[…] all there has been in parliament is criticism. They should have praised us a little at least.”

The prime minister said that during negotiations with the opposition, their behaviour “made it evident that their interests and Pakistan’s interests are opposed”.

He said that they only sought to protect their own interests and “attempted to blackmail us in every way possible”.

PM Imran said that of 38 proposed amendments to the accountability law, they put forth their own amendments to 34 clauses. “They simply wanted to bury the NAB legislation.”

“They used FATF legislation to save their own selves from corruption charges […] when they saw we weren’t being blackmailed, a snag occurred while discussing anti-money laundering legislation.”

Discussing the menace of money laundering, he said illegally obtained funds are always kept abroad and invested in properties.

“The developing world is getting poorer because each year around $1,000bn go to developed countries this way.”

He said this money, it it were used in the country, would go towards human development.

“These dollars that are sent abroad, it ultimately puts a pressure on the rupee […] and then they ask us to exclude money laundering from [National Accountability Bureau] legislation,” remarked the prime minister.

He said passing the legislation that had been approved today was most important for money laundering in particular. Citing a report by the US State Department, he said money laundering worth $10bn is carried out from Pakistan. “And the loan that we took from the IMF is $6bn […] if we stop this money laundering we will no longer need these loans.”

Addressing the opposition, he said that the government is ready to compromise on anything in favour of Pakistan “but we will never compromise on corruption”.

The prime minister also expressed sorrow and regret over the Lahore motorway gang-rape.

“We are thinking of passing legislation that not only protects our women but also our children whose lives are ruined.

“Rape should be viewed as something that destroys lives. In our culture, families suffer also, and the children, especially, have life-long trauma.”

The prime minister said the government will have a three-tiered approach.

“Firstly, we will have registration. Sex offenders everywhere are registered. They are usually repeat offenders,” he said.

“Just like Abid. He was involved in a gang-rape in the past and he was able to get away with it,” PM Imran said.

He said that far too many incidences go unreported. “We always find out that a small number is reported.”

The premier said that a bill to address the issue of rape will be presented in the parliament soon.

“It will not only focus on exemplary punishment, but also conviction, to begin with, which is not easy. The kind of evidence required is very difficult to put forward.”

He said that for the victim to stand in the witness box and provide a statement is also a very difficult task and so, the a “comprehensive legislation” will be introduced also keeping these aspects in mind.

Source Link: PM Imran lambastes opposition for having interests ‘at odds with Pakistan’s’

Clinical trials for coronavirus vaccine to begin in Pakistan this week