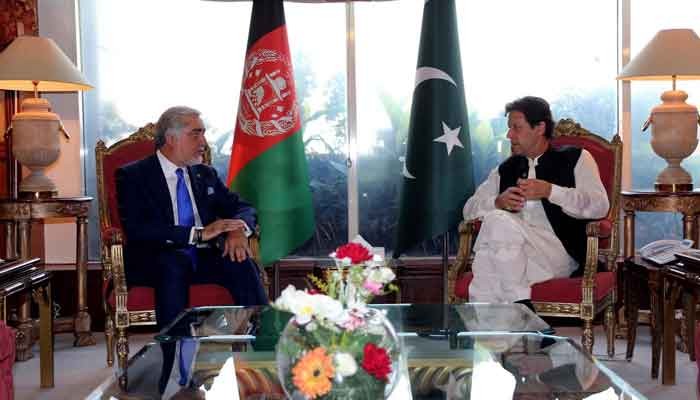 According to a tweet by the prime minister on Wednesday, the main theme of the discussion between the two centered on how Pakistan and Afghanistan should both learns lessons from the past and not remain in it.

“We had a very interesting conversation: theme being the Past is an invaluable teacher to learn from but not to live in,” tweeted the prime minister.

The meeting between the two sides took place as the intra-Afghan peace talks resumed a few days ago in Doha, as both the Taliban and the Afghanistan government continue efforts to end bloodshed in the country and come up with a political solution to the crisis.

Read more: A timeline of the historic Afghanistan peace talks

“The time is now for both nations, to make a further detour, define a new vision, address outstanding issues as well as our shared interest, [and] realise that peace and stability in Afghanistan or any country in our south and central Asian geography [will] have a far reaching ripple effect,” Abdullah had said during the Institute of Strategic Studies in Islamabad on Tuesday.

He had thanked Pakistan for facilitating the Afghan peace process and the country’s efforts in ensuring the opportunity for dignified, durable and sustainable peace in the war-torn country.

“Pakistan has played an important role in facilitating this moment, and my delegation and I, thank you, the government and people of Pakistan for their efforts,” Dr Abdullah had said in his address.

The Afghan leader, who was in Islamabad for a three-day trip, had emphasised that the start of negotiations between Kabul and the Taliban movement is an “important opportunity”. He added, that as he was speaking in Pakistan, delegations from both the sides were in Doha “sitting around a table discussing ways and means of ending the decades of conflict through a political settlement in Afghanistan”.

The chairman for the reconciliation council had urged that there is a “need to go beyond the usual stale rhetoric and shadowy conspiracy theories”.

Share
Previous A ‘leaked’ private chat shows what a gem Dean Jones was as a person
Next New Zealand govt gives go ahead for Pakistan, West Indies cricket tours