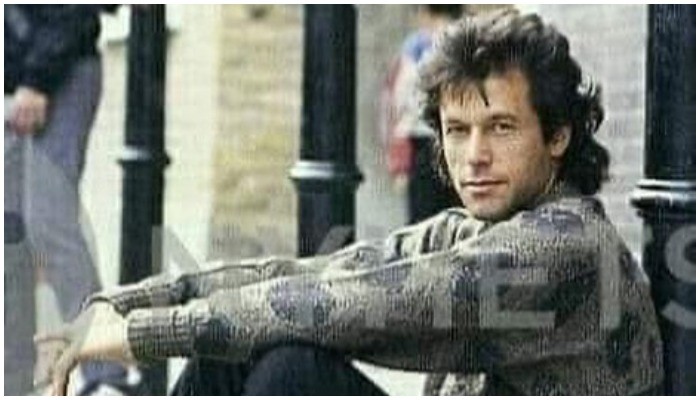 Prime Minister Imran Khan rarely fails to impress his fans and followers with his throwback pictures which he shares on social media quite often.

Following his picture-posting routine, the premier took to Instagram on Wednesday and uploaded yet another throwback photograph from his youthful days.

In the snapshot, the premier could be seen rocking a grey sweater teamed with a pair of black dress pants and matching Derby shoes.

To pose for the snap, PM Khan sat on a raised concrete platform, leaning against a pillar. He gazed straight at the camera and flashed a small smile.

Since a picture speaks louder than words, the PM did not include a long caption. Instead, he just informed users that the snap was captured in the year 1989.

Within an hour of going live, the picture racked up close to 90,000 likes and 1,580-plus comments in which his ardent admirers praised his looks and showered him with numerous compliments.

“A truly inspiring person and a leader. His words and character today is becoming an example to both the youth of Pakistan and the youth around the world. Masha Allah, I admire him a lot for the person he is today. God bless our amazing leader. Ameen,” another fan wrote to express their feelings for the leader.

Check this out too: PM Imran Khan’s rare photo with parents, sisters when he was three years old

Share
Previous Prince Harry ‘has no roots or confidants’ in the US: report
Next Lahore court remands Khawaja Asif in NAB custody

CDA employees arrested for stealing petrol from vehicles in Islamabad

A general view of a residential area seen during a power breakdown in Karachi, Pakistan, …