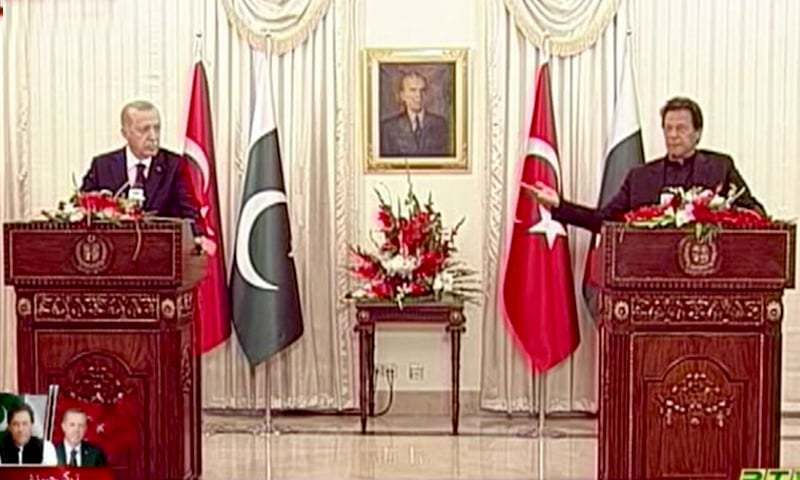 In his speech, Prime Minister Imran thanked Erdogan, who is on a two-day visit to Pakistan, on the country’s behalf for speaking up to raise the Kashmir issue.

He noted that at least eight million Kashmiris are under Indian siege, while Kashmiri leaders are being put in jail. “They have no rights … they are living in fear,” he added.

The premier reiterated that Kashmir is a disputed territory according to UN resolutions.

He said through timelines, the cooperation being carried out between Pakistan and Turkey will benefit both the countries.

Prime Minister Imran noted that besides Kashmir, Turkey had supported Pakistan on the issue of the Financial Action Task Force (FATF) as well. He said the two countries “stand together” when it comes to strategic international issues.

“Our cooperation apart from politics is necessary because they (Turkey) have an advanced film industry. We want to develop content with them to address Islamophobia so that we can take a stand against the incorrect portrayal of Muslims,” the premier said.

President Erdogan in his speech said with his ongoing trip, he had the pleasure of visiting Pakistan after three years again. He said he saw the country as “our second home”.

He thanked Prime Minister Imran and the authorities for the hospitality extended to the Turkish delegation.

He said the holding of the Strategic Cooperation Council meeting was one of the most important symbols of the Pak-Turk friendship.

“We have deliberated our relationship in detail during the council meeting,” he said, adding that the fact that the two countries have signed 13 agreements is an indicator of “how important the relations between us are”.

Earlier, Prime Minister Imran and President Erdogan witnessed the signing of 13 MoUs by officials representing both the countries.

The ceremony came after the conclusion of the plenary session of the 6th round of Pakistan-Turkey High Level Strategic Cooperation Council in Islamabad.

According to state broadcaster PTV, the MoUs signed between the two countries concern cooperation in the fields of tourism and culture, food security, postal services, railways, military training, trade, information technology, etc. An agreement was also signed for cooperation between the state-owned Turkish Radio and Television corporation (TRT) and PTV and Radio Pakistan.

Earlier in the day, President Erdogan and Prime Minister Imran had held a one-on-one meeting at Prime Minister House during which bilateral relations were discussed.

The Sindh health department on Wednesday issued an advisory on soybean dust allergy, after 14 …