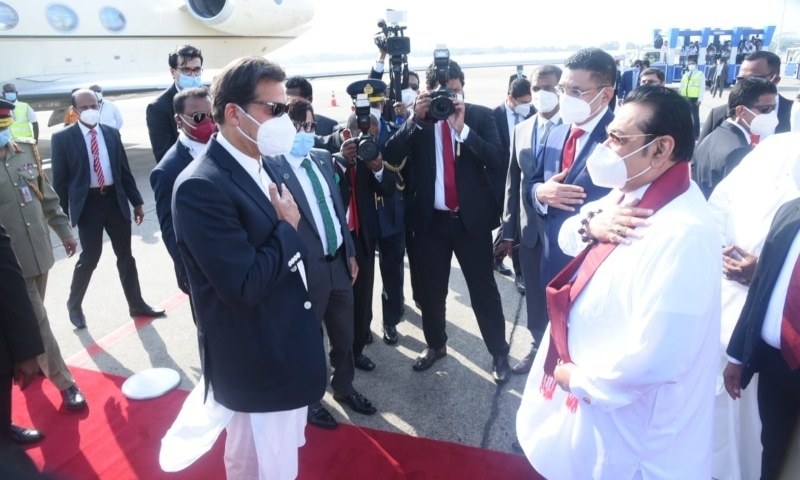 Prime Minister Imran Khan on Tuesday arrived in Sri Lanka on a two-day visit to the country on the invitation of the country’s prime minister, Mahinda Rajapaksa.

This is his first visit to Sri Lanka after assuming the office of prime minister.

On arrival in Colombo, the prime minister was received by his Sri Lankan counterpart and presented a guard of honour. He was later introduced to members of the Sri Lankan cabinet.

Prime Minister Imran and Rajapaksa then held a one-on-one meeting at Temple Trees, the official residence of the Sri Lankan prime minister.

It was followed by delegation-level talks between Imran and Rajapaksa, according to the former’s office.

In a tweet, the Sri Lankan prime minister said: “I warmly welcome Prime Minister Imran Khan of #Pakistan who is on his maiden visit to #SriLanka. I Look forward to interacting with the PM and his delegation on matters of mutual interest to both our nations.”

Following their meeting, Prime Minister Imran tweeted: “It’s a pleasure to be back in Sri Lanka again. My earlier two visits were on cricket tours in ’75 & ’86 where I witnessed the evolution of Sri Lankan cricket. Today I enjoyed the welcoming hospitality of Sri Lankan PM [Rajapaksa].”

The premier said he had “interesting conversations on a wide range of issues of mutual interest” with his Sri Lankan counterpart. He said would meet the country’s president as well as the Sri Lankan business community on Wednesday.

A Foreign Office statement said Imran and Rajapaksa during the meeting held wide-ranging discussions with a focus on reinforcing a “broad-based and enduring partnership” between Pakistan and Sri Lanka to advance the shared objectives of peace, stability and economic prosperity in South Asia.

​The two leaders reaffirmed their resolve to work together across a broad range of areas and acknowledged the opportunities for mutually beneficial collaboration in the areas of trade and investment, IT and human resource development, agriculture and science and technology, security and defence cooperation, and culture and tourism.

“Appreciating the rich Buddhist heritage of Pakistan and existence of great potential for religious tourism, it was agreed to enhance mutual collaboration including through sharing expertise in the hospitality industry, training and capacity-building,” the FO said.​

​Both sides also expressed satisfaction at the close cooperation between the two countries at multilateral fora and resolved to further deepen strategic communication and coordination at all levels.

According to the FO, ​Prime Minister Imran underscored Pakistan’s commitment to peace and stability in the region and highlighted Pakistan’s “shifting focus from geo-strategic to geo-economics”.

He “emphasised the importance of resolving disputes through dialogue and promoting the vision of peace, progress and prosperity in South Asia and beyond”, the press release said.

At a ceremony, the two prime ministers witnessed the signing of important MoUs on cooperation in the fields of tourism, investment, education, and technology.

They later jointly addressed the media.

In a tweet, Qureshi said that Sri Lanka and Pakistan share a “close relationship” and “all areas of cooperation between Pakistan and Sri Lanka will be discussed and strengthened” during the visit.

According to Radio Pakistan, the premier will hold talks with the Sri Lankan leadership to further enhance bilateral cooperation in diverse sectors. The prime minister is accompanied by a high-level delegation, including members of the cabinet and senior officials.

He will also lead delegation-level talks, covering all areas of cooperation between the two countries, including trade, investment, health, education, agriculture, science and technology, in addition to defence and culture tourism.

PM Imran will also participate in a joint ‘Trade and Investment Conference’ aimed at promoting trade and investment between the two countries. A number of agreements to enhance bilateral cooperation will be signed during the visit.

Earlier, the Foreign Office (FO) had said that the reconstitution of the Sri Lanka-Pakistan Parliame­n­tary Friendship Associa­tion will also be announced to further promote parliamentary exchanges bet­ween the two countries.

However, the FO had not mentioned the speech to the Sri Lankan parliament.

The Sri Lankan government, while cancelling the event, had officially stated that this was being done because of the Covid-19 pandemic.

However, diplomatic sources and Sri Lankan media have said that it was done out of concerns that PM Imran could speak about the situation in occupied Kashmir, which could further damage Colombo’s already troubled relations with New Delhi.

Another speculation doing the rounds is that the Sri Lankan government is worried that PM Imran in his speech could make a reference to the plight of Sri Lankan Muslims, who have been facing abuses and discrimination in the Buddhist-dominated country.

FO spokesman Zahid Hafeez Chaudhri at the weekly media briefing had said that the elements of the visit would be decided according to “the Covid-19-related health and safety protocols”.