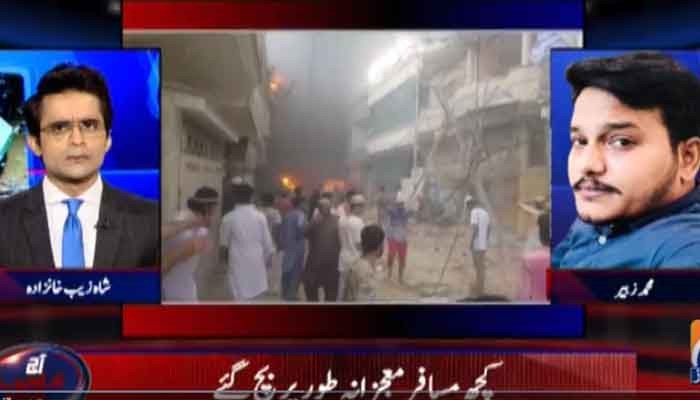 Muhammad Zubair, a fortunate survivor from today’s incident, said he heard “screams” of people as soon as the plane crashed over houses in a residential area in Karachi’s Model Colony.

According to the Sindh Health Department, 66 people have died as a result of the unfortunate incident. Meanwhile, according to a list released by the airline, 51 men, 31 women and nine children were aboard the aircraft.

Sharing his account in Geo News programme Aaj Shahzeb Khanzada Kay Sath, Zubair said: “I am feeling well so far, but my hands and feet have burned a bit.”

“I was coming to Karachi for Eid holidays and the flight left the airport at 1[pm] from Lahore, it was flying fine then. When the pilot announced that we are landing in Karachi and he took the plane a bit down two or three shocks were felt,” Zubair said.

The survivor said that the pilot flew it up after which the people started “praying” and for 10-15 minutes the plane was flying in the air.

“After analysing the situation and viewing a place where there was not much rush he announced that he[pilot] was landing the plane but unfortunately it crashed,” he said.

“The next moment there was a hard crash and I lost consciousness,” said Zubair, adding that when he came woke up there was ‘smoke everywhere’.

“I could hear screams from all directions. Kids and adults. All I could see was fire. I couldn’t see any people – just hear their screams.

“I opened my seat belt and saw some light – I went towards the light. I had to jump down about 10 feet to get to safety.”

“I was then taken to Jinnah hospital and now I am in Civil hospital.”

When asked that did the pilot announce anything after the shocks were felt and what was the duration in between the two landing attempts, he said: “The time duration was in between 10-15 minutes and the plane crashed nearly 2-3 minutes after he announced that the plane was about to land.”

“No one [passengers] was aware that the plane about to crash, they were flying the plane in a smooth manner,” he said.

Zubair said that there was no disturbance on the flight and that it was smooth until the crash.