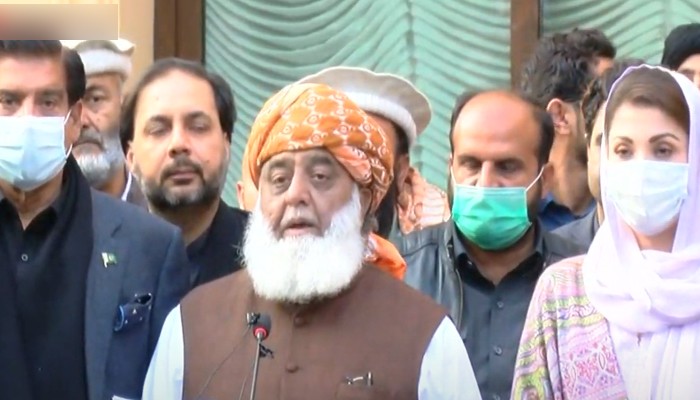 ISLAMABAD: Pakistan Democratic Movement (PDM) chief Maulana Fazl ur Rehman announced the opposition alliance’s protest against the delay  in foreign funding case pending against the PTI before the Election Commission of Pakistan (ECP).

Addressing the media after a meeting in the federal capital alongside PML-N vice-president Maryam Nawaz, the JUI-F chief said the case cannot be delayed any further and urged the Commission to announce a verdict soon.

“Decisions against elected prime ministers are given in a few months’ time but verdict against a selected premier has been pending for over six years,” he said.

“Foreign funding case is the biggest scandal in Pakistan. Imran Khan has amassed millions in the name of party funds. He took the mother of all NROs to create political instability in the country.”

The JUI-F chief claimed PM Imran Khan used charity funds for personal business and to spread chaos. He said that the alliance discussed Tuesday’s scheduled protest outside the ECP office.

It may be added here that the protest will not be attended by PPP chairman Bilawal Bhutto Zardari who is currently in Sukkur and plans to celebrate PPP’s win in Umerkot by-polls.

Fazl also announced anti-government demonstrations scheduled for the near future. “The PDM will participate in the anti-Israel march in Karachi on January 21. On February 5, we will hold a gathering at Liaquat Bagh in Rawalpindi to express solidarity with our Kashmiri brothers,” he said, criticising the incumbent government over its Kashmir policy.

Fazl said the PDM will deliberate over a plan of action if Prime Minister Imran Khan does not step down before January 31. “The long march will be led from across the country.”

‘Government its own enemy”

Talking to media after the Maulana, Maryam said the Opposition was against “interference of undemocratic forces” in the country’s politics. “Mian Nawaz Sharif has been saying from day 1 that Imran Khan is just a pawn in this game. The interference of institutions in the democratic process needs to end.”

Maryam stressed that there were no “backdoor” negotiations going on. “The [incumbent] government is its own enemy,” she added.

Uzair Baloch has been acquitted in 11 cases so far

China, under growing global pressure over its treatment of a Muslim minority in its far …