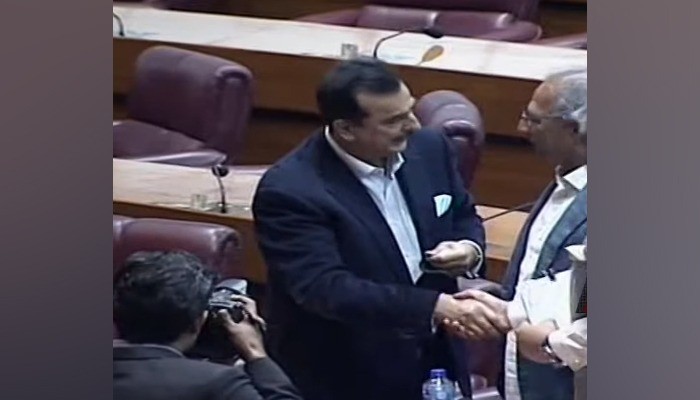 After the result was announced, Abdul Hafeez Shaikh and the former prime minister shook hands and hugged each other. The news of Hafeez’s defeat was told to him by Zain Qureshi — who was the minister’s polling agent — following which the two men embraced each other.

Geo ancherperson Shahzeb Khanzada termed it a huge upset for Prime Minister Imran Khan since he had personally campaigned for Shaikh and had managed to win over most of the government’s allies.

Khanzada said that Gillani’s victory could make the prime minister even more upset with Shehryar Afridi, who wasted his vote when he signed the ballot papers.

Senior ministers of the government such as Fawad Chaudhry and Sheikh Rashid had earlier claimed that Sheikh would defeat the former prime minister easily.

Analyst Irshad Bhatti agreed with Khanzada, saying that it was “huge upset” for the government, adding that his earlier prediction that the former prime minister would lose had been proved wrong.

‘Zardari has won and Imran Khan has lost’

Senior analyst Mazhar Abbas said that this was, in reality, a victory for former president Asif Ali Zardari and a loss for Prime Minister Imran Khan.

“It was Zardari who urged the PDM to delay the long march and contest the Senate elections,” he said, adding that a no-confidence movement against the prime minister could be successful.

Capital Talk host Hamid Mir said that before the result was announced, he spoke to Zardari over the phone and could hear people celebrating in the background.

Mir said that he could hear Rukhsana Bhangash and PPP chairperson Bilawal Bhutto-Zardari celebrating in the background. “Bilawal was saying repeatedly,”‘We have won, we have won.'”

The veteran journalist, however, said that the government will not accept Gilani’s victory easily and will do its utmost to disqualify the former prime minister.

“I reiterate, the government and Prime Minister Imran Khan will not accept this election result,” he said.

Polling for the Senate election commenced at 9am and continued till 5pm after which the votes were counted.

The PDM fielded former prime minister Yousaf Raza Gillani as its joint nominee for the Islamabad seat against the PTI’s Abdul Hafeez Shaikh.

This is a developing story and will be updated as more details come in.