Pakistanis won’t be allowed to go to Iran until coronavirus crisis is dealt with: Balochistan govt spokesman – Pakistan 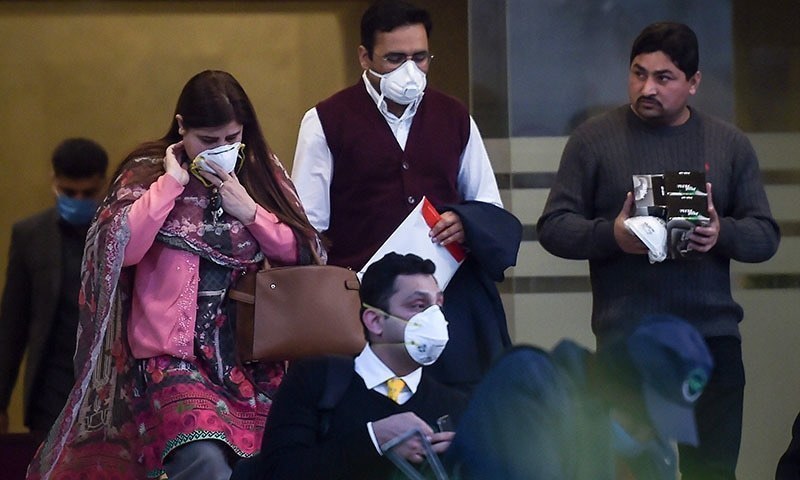 Pakistanis will not be allowed to travel to Iran until the coronavirus crisis is sorted out, Balochistan government spokesperson Liaquat Shahwani announced on Sunday, as the number of casualties from the disease in the neighbouring country rose to eight.

He added that Pakistani pilgrims who are currently in Iran will return in March. Shahwani said that the Iranian government had been requested to allow pilgrims to stay in Iran until next month.

About 5,000 pilgrims are currently in Iran.

Shahwani said that the Balochistan government had taken immediate preventive measures after receiving reports that coronavirus cases had been detected in Iran. He said that 10,000 face masks had been sent in areas near the Pakistan-Iran border and all hospitals have been alerted.

Pakistan also temporarily closed its border with Iran at Taftan on Sunday morning.

Balochistan Home Minister Mir Ziaullah Langove told DawnNewsTV that the border was temporarily closed by the authorities in light of reports of coronavirus deaths in Iran.

“Yes we have closed the border,” Langove confirmed.

The Balochistan government has also imposed a ban on the travel of pilgrims from Pakistan into Iran by road and has asked the provincial home department to coordinate with other provinces in this regard.

Balochistan Chief Minister Jam Kamal Alyani has also directed the provincial disaster management authority to establish a 100-bed tent hospital at the Pak-Iran border crossing in Taftan to cope with an emergency situation.

Assistant Commissioner of Taftan Najeebullah Qambrani said the screening of those pilgrims staying at Pakistan House has started.

He added that preparations for setting up the 100-bed tent hospital in Taftan have also started and a team of doctors has arrived from Islamabad.

Meanwhile, Minister for Religious Affairs Noorul Haq Qadri spoke to Iranian authorities about measures being taken to protect pilgrims from the novel coronavirus. A statement by the Religious Affairs Ministry said that Haq is also in touch with religious scholars and tour groups in order to design a policy to protect the pilgrims from the disease.

The statement added that “joint teams had been constituted to protect pilgrims, travelling through the Taftan border, from the coronavirus”.

“We stand by our Chinese brothers in this time of difficulty,” the statement quoted Haq as saying.

Separately, Special Assistant to the Prime Minister on Health Dr Zafar Mirza held a meeting in Islamabad, where he was briefed on the situation in Iran. Dr Mirza said that the government was equipped to deal with “any eventuality of coronavirus outbreak”, Radio Pakistan reported.

The prime minister’s aide said that teams have been posted across the Taftan border, where all passengers entering Pakistan are being screened.

Furthermore, passengers were being screened at major airports in Karachi, Lahore and Quetta, he said.

The Balochistan government had earlier imposed an emergency in all bordering districts with Iran with immediate effect.

Prime Minister Imran Khan on Saturday also contacted Balochistan Chief Minister Jam Kamal Alyani and discussed options to stop the virus from entering the country. He told the chief minister to take all protective measures in the province along the Pak-Iran border.

Alyani had said that he was supervising all safety measures taken by the provincial government.

Dr Mirza had also reached out to the Balochistan chief minister and assured all help and cooperation to the provincial government.

Senate Chairman Sadiq Sanjrani issued a five-point directive to prevent the spread of coronavirus in Pakistan, which called for closing off of the Pakistan-Iran border or increased regulation at border crossing points.

He further said that a health emergency be imposed in areas near the border.

Turkey, too, will close its border with Iran as a precautionary measure to halt the potential spread of coronavirus, Turkish Health Minister Fahrettin Koca said. All highways and railways will be closed as of 5pm (local time) on Sunday and flights from Iran suspended, he told reporters.

The COVID-19 outbreak has claimed the lives of eight people in Iran since Wednesday. Authorities have ordered as a “preventive measure” the closure of schools, universities and other educational centres in 14 provinces across the country from Sunday.

The outbreak in Iran has centred on the holy city of Qom, where officials say travellers from China brought the new coronavirus.

Iranian health ministry’s spokesperson Kianoush Jahanpour added that out 15 newly confirmed cases, seven were in Qom, while four were in the capital, Tehran.

Additional input from The Associated Press, Nadir Guramani and Reuters.

Source Link: Pakistanis won’t be allowed to go to Iran until coronavirus crisis is dealt with: Balochistan govt spokesman – Pakistan

Files ISLAMABAD: Pakistani authorities are trying to track down 41,000 people who attended a large …