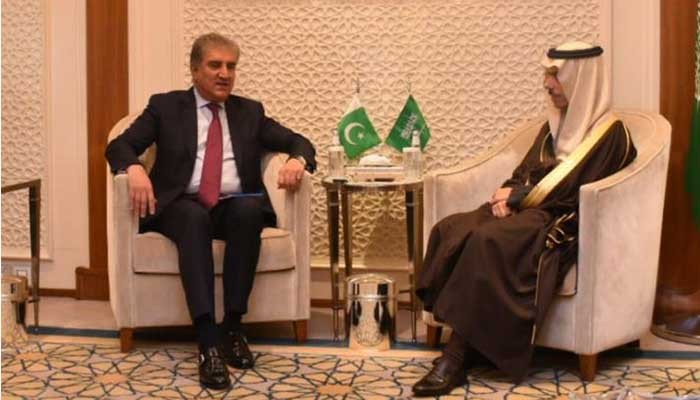 Foreign Minister Shah Mehmood Qureshi on Tuesday shared that during his “in depth discussion” with his Saudi counterpart he conveyed Pakistan’s support to facilitate “constructive engagement” for peace in the region.

Qureshi, in a tweet said that he held the in depth discussion with Saudi Foreign Minister Faisal bin Farhan in Riyadh during the second leg of his diplomatic outreach in the Middle East.

“While reaffirming our strategic bilateral relations, I emphasised Pakistan’s support for all peace efforts in the region and the facilitation of constructive engagement among all,” the foreign minister said..

Qureshi met his Saudi counterpart on Monday as part of Pakistan’s efforts to help defuse tensions in the Middle East amid heightened hostility between Iran and the US.

On Sunday, Qureshi had met Iranian President Hassan Rouhani in Tehran following the killing of a top Iranian general in a US drone strike earlier this month.

In his meeting with the Iranian president, FM Qureshi called for “using the diplomatic means” to reduce the tensions in the region and “resolve outstanding issues amicably and peacefully”.

Tensions between Iran and the United States have spiked in recent weeks after the US killed Iranian commander Qassem Soleimani in a drone strike in Baghdad. Iran retaliated by targeting a US troops base in Iraq.

Following the developments, Prime Minister Imran Khan had directed Qureshi to meet with Iranian and Saudi leaders to underscore the need for immediate and collective efforts for a peaceful resolution of disputes.