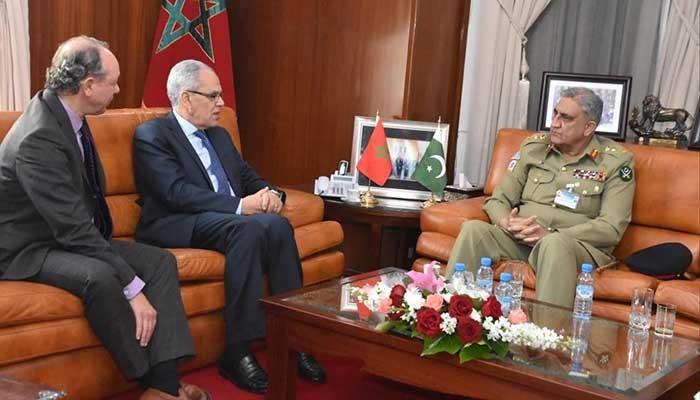 Chief of Army Staff (COAS) General Qamar Javed Bajwa said Pakistan has made sacrifices for a peaceful region and the world while being at the forefront of the war against terrorism.

The Inter-Services Public Relations (ISPR) said Gen Bajwa passed the remarks while addressing the Royal College of Higher Military Education on “Emerging Security Environment and its Challenges, Security situation in the region and Pakistan’s contributions in war against terrorism”. The COAS made the address during a four-day official visit to Morocco.

“Pakistan being the front line country against terrorism, gave sacrifices and contributions against the global menace for a peaceful region and world,” said Gen Bajwa.

During the visit, Gen Bajwa met Minister Delegate to the Head of Government in Charge of the Administration of National Defence Abdellatif Loudiyi and Inspector General of Royal Armed Forces General Abdelfattah Lourak.

“Pakistan has and will always stand with Morocco even in the most difficult times,” Gen Bajwa told the Moroccan officials.

The visit comes after the army chief went to Kuwait on a day-long visit on February 20.