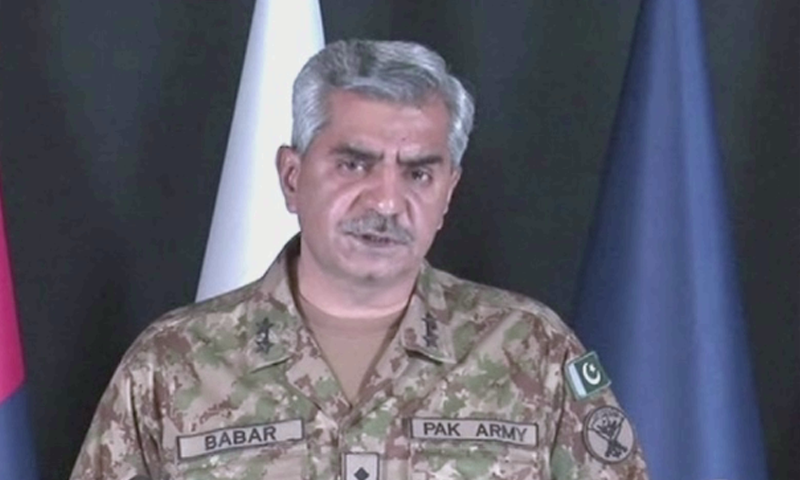 The director general of the Inter-Services Public Relations (ISPR) started the news conference by speaking about Indian oppression in occupied Kashmir.

“Azaadi (independence) is a huge blessing,” he said. “Ask about the importance of freedom from the mother of an occupied Kashmir resident that buries her son with the Pakistan flag.”

“In occupied Kashmir, the inhumane siege has continued for one year. Genocide is being done and human rights are being violated through India’s state terrorism in the occupied [region].

“Under a pre-planned, thought-out plan, India by changing the demography of the region is trying to evict the Muslims living there,” Maj Gen Iftikhar said.

“There is no atrocity left which the Kashmiris have not witnessed. Youths are being martyred and being buried in unnamed places in the name of counter-terrorism.”

He noted that the targeting of Kashmiris with pellet guns by the Indian forces has become the norm while the region’s local leadership has been kept in detention for one year.

He said Pakistan has “left no stone unturned” in raising Kashmiris’ plight before the world.

“The Government of Pakistan at all regional and international forums has raised awareness on the Kashmir issue and voices against the oppression are reverberating through the world’s corridors.”

Genocide Watch and international media have unmasked India’s actions in the occupied valley while the United Nations secretary general has stressed human rights in Kashmir, the DG ISPR said.

“During the past one year, the issue has been raised in the UN three times and this shows that the issue is of cardinal importance in the eyes of the world. And their (Kashmiris’) fight for independence will InshAllah be successful.”

He said the situation at the Line of Control is linked to the Kashmir issue, saying: “Despite the ceasefire appeal by the UN secretary general during the pandemic, India continued their traditional cowardly actions and targeted innocent people.”

He said till now, India has committed 1,927 ceasefire violations and has deliberately targeted peaceful people living along the LoC in Azad Kashmir.

“Sixteen innocent people have been martyred while 158 have been injured. In these ceasefire violations, heavy weapons were used indiscriminately.

“Let me also tell you that the Pakistan Army responds to all the ceasefire violations effectively, but being a professional army we make military targets and target those posts that are carrying out [the firing].

“On July 22, international media toured Azad Kashmir. They were allowed access to the people of AJK; they saw and interacted with the people targeted by the ceasefire violations.

“The government, in light of India’s actions, for the protection of the people, has decided to build shelters in the homes of AJK residents. One thousand shelters have been constructed and more are being made.”