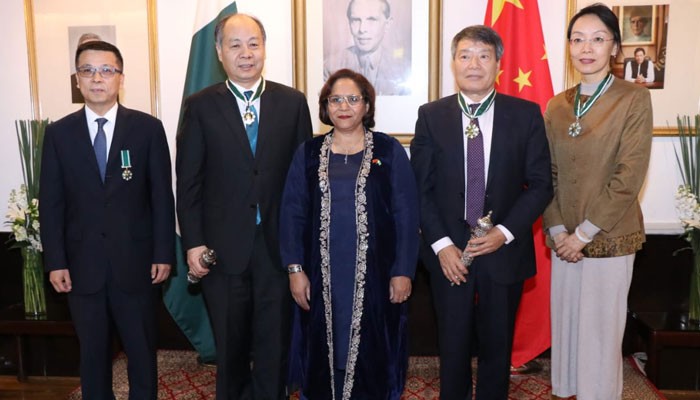 BEIJING: Four Chinese dignitaries were awarded civil awards of Pakistan, in recognition for their services towards the country at a ceremony held at the Embassy of Pakistan in Beijing on Friday.

Xu Shaoshi who served as the Chairman of the National Development and Reform Commission (NDRC) of the People’s Republic of China from 2013 to 2017 was awarded Hilal-e-Pakistan.

During his time, the China-Pakistan Economic corridor (CPEC), the flagship project of China’s Belt and Road Initiative (BRI), proceeded rapidly from concept to concrete reality. In these formative first years of CPEC, notwithstanding the unprecedented size, scale and development pace of the CPEC portfolio, Pakistan and China were able through unremitting efforts to deliver tangible benefits to the peoples of both countries.

Hilal-i-Quaid-e-Azam was conferred upon Wang Xiaotao, who is currently heading the newly established International Development Cooperation Agency (IDCA) of the People’s Republic of China.

Xiaotao has also co-chaired four meetings of the CPEC Joint Cooperation committee (JCC). Under his guidance and direction, bilateral cooperation on CPEC transcended the planning and implementation stages, delivered direct benefits to the peoples of Pakistan and China. A noteworthy accomplishment of the JCC mechanism under Xiaotao’s co-chairmanship came in Islamabad in November, 2017, when various aspects of CPEC cooperation were enshrined in the “Long-Term Plan for CPEC”, providing a detailed blueprint for the evolution of CPEC through 2030.

Sitara-i-Pakistan was conferred upon Lin Yi who is the Vice President of Chinese People’s Association for Friendship with Foreign Countries (CPAFFC) since 2015 and is in-charge of the Asian and African Affairs.

Under her guidance, the CPAFFC played a leading role in organising a series of high-profile celebrations to mark the 65th anniversary of the establishment of bilateral diplomatic relations in 2016. Yi and her team have proactively continued to develop plans and seek opportunities to promote relations, especially among the youths of both countries, which is indispensible for ensuring the perpetuity of this historic relationship across generations.

Tamgha-i-Pakistan was conferred upon Li Xuedong, who formerly served as the Director General of the International Cooperation Department of NDRC. Since 2018, he has been serving as the Chairman of the Development and Reform Commission of China’s northeastern Liaoning province.

During his tenure at the International Cooperation Department of the NDRC, Xuedong demonstrated sincere goodwill and friendship towards Pakistan. His unremitting commitment to promoting CPEC, as the flagship project of China’s Belt and Road Initiative (BRI), contributed directly to rapid progress in all core areas, especially in Gwadar and industrial cooperation. His extraordinary efforts and forthcoming approach have contributed to creating a firm foundation for further development of CPEC and Pakistan-China economic cooperation in the years to come.

Share
Previous Get tough on players too
Next How did Kylie Rae Harris die? Officials release new statement | Entertainment