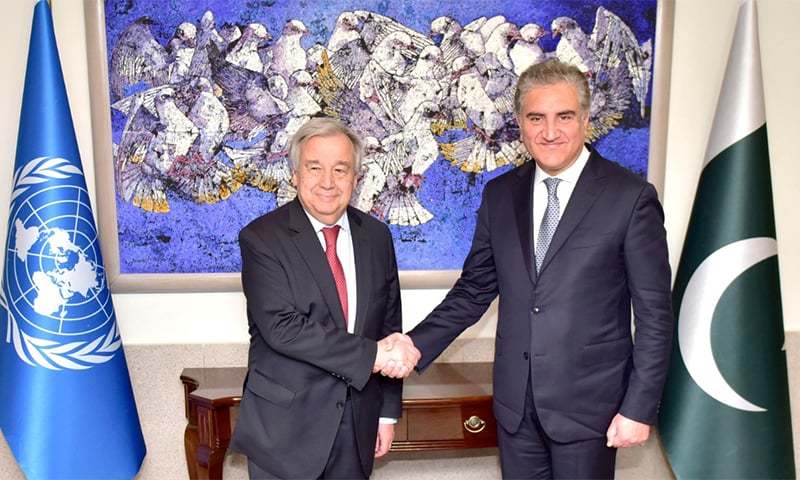 United Nations General Secretary Antonio Guterres on Sunday emphasised the importance to “de-escalate, both militarily and verbally” while talking about relations between Pakistan and India.

Guterres was addressing a joint press conference along with Foreign Minister Shah Mahmood Qureshi, following a meeting. While speaking to reporters, Foreign Minister Qureshi said that his sitting with Guterres was the “the most interesting and rewarding meeting that I have had with you, so far”.

Qureshi highlighted Pakistan’s concerns over India’s actions in occupied Kashmir and last year’s decision to strip the region of its special status, terming it a “unilateral approach”. He directed the UN chief’s attention to the ongoing lockdown and conmmunications blackout in occupied Kashmir and said that “all shades of Kashmiri opinions, barring the BJP mindset, have rejected those actions”.

Qureshi also pointed out that since the events of August 5, 2019, when India has abrogated occupied Kashmir’s special status, ceasefire violations along the Line of Control had increased.

While talking about occupied Jammu and Kashmir and tensions along Line of Control, Guterres said he was “deeply concerned”, adding that he has “repeatedly stressed the importance of exercising maximum restraint”.

“Diplomacy and dialogue remain the only tools that guarantee peace and stability with solutions in accordance with the Charter of United Nations and resolutions of the Security Council,” Guterres told the media, adding that he has repeatedly “reiterated his offer to exercise my good offices should both sides ask”.

The UN chief also lauded Pakistan’s contributions to UN peacekeeping efforts as well as the inauguration of the Kartarpur corridor, which was held last year. Calling the Kartarpur initiative a “symbol of interfaith harmony, a unique experiment in cross-border ties”, the UN chief said that the opening of the corridor showed “Pakistan’s commitment to peace”.

The UN chief is on a four-day visit to Pakistan to attend an international conference on Afghan refugees.

During his visit, the UN chief will speak at the international conference ’40 Years of Hosting Afghan Refugees in Pakistan’.

While addressing a joint press conference with Qureshi today, Guterres said: “One of the main purposes of my visit is to spotlight the real Pakistan, with all its possibilities and potential.”

The two-day conference in Islamabad, starting on February 17, will be a recognition of Pakistan’s “tremendous generosity” in hosting millions of refugees from Afghanistan over four decades, his spokesman Stephane Dujarric had said during a regular noon briefing at the UN Headquarters in New York on Friday.

The conference, which is being organised by the Government of Pakistan and the United Nations Refugee Agency (UNHCR), will be inaugurated by Prime Minister Imran Khan. Various senior US officials will also attend the conference.

During his visit, Guterres is expected to meet with Prime Minister Imran and other high-level government officials, his spokesman said. The UN Secretary General will meet President Arif Alvi on Monday.

On Tuesday, he will visit Lahore where he will meet students and attend an event on Pakistan’s polio vaccination campaign. He will also travel to Kartarpur to visit the Sikh holy site of Gurdwara Kartarpur Sahib.

Responding to a question, the spokesman said the UN chief will not be visiting the disputed Kashmir region during this trip.

He is set to return to New York on Wednesday.