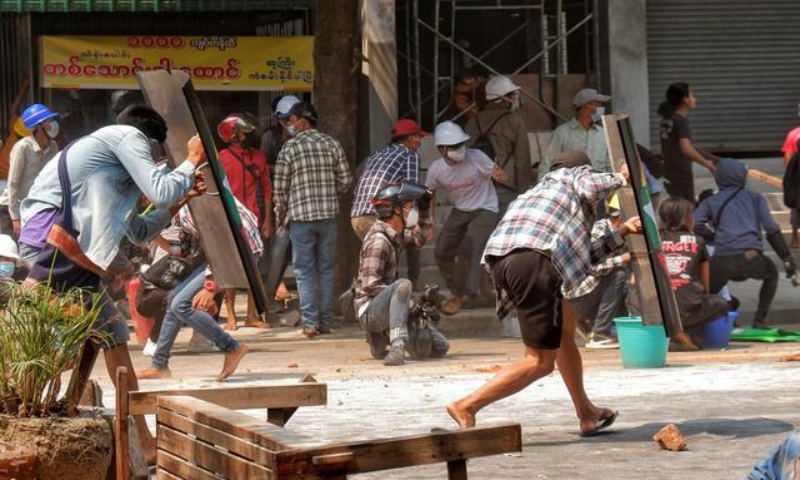 The security forces resorted to live fire with little warning in several towns and cities, witnesses said, as the junta appeared more determined than ever to stamp out protests against a February 1 coup that ousted the elected government of Aung San Suu Kyi.

“They marched towards us and fired tear gas, marched again and used stun grenades,” Si Thu Maung, a protest leader in the central town of Myingyan, told Reuters.

“Then they didn’t spray us with water cannon, no warning to disperse, they just fired their guns.”

A spokesman for the ruling military council did not answer telephone calls seeking comment.

One teenaged boy was killed in Myingyan but the heaviest toll was in another central town, Monywa, where five people — four men and one woman — were killed, said Ko Thit Sar, editor of the Monywa Gazette.

“We’ve confirmed with family members and doctors, five people have been killed,” he told Reuters.

“At least 30 people are wounded, some still unconscious.”

Two people were killed in the country’s second-biggest city, Mandalay, a witness and media reports said, and one person was killed when police opened fire in the main city of Yangon, a witness there said.

At least 31 people have been killed since the coup.

“The country is like the Tiananmen Square in most of its major cities,” the Archbishop of Yangon, Cardinal Charles Maung Bo, said on Twitter, alluding to the suppression of student-led protests in Beijing in 1989.

The violence came a day after foreign ministers from Southeast Asian neighbours urged restraint but failed to unite behind a call for the release of Suu Kyi and the restoration of democracy.

Security forces also detained about 300 protesters as they broke up protests in Yangon, the Myanmar Now news agency reported.

A video posted on social media showed lines of young men, hands on heads, filing into army trucks as police and soldiers stood guard. Reuters was unable to verify the footage.

Images of a 19-year-old woman, one of the two shot dead in Mandalay, showed her wearing a T-shirt that read “Everything will be ok”.

Police ordered three medics out of an ambulance, shot up the windscreen and then kicked and beat the workers with gun butts and batons, a video broadcast by US-funded Radio Free Asia showed. Reuters was unable to verify the video independently.

Democracy activist Esther Ze Naw told Reuters via a messaging app that the sacrifices of those who died would not be in vain.

“We will continue this fight and win. We shall overcome this and win,” she said.

On Tuesday, the Association of Southeast Asian Nations (Asean) failed to make a breakthrough in a virtual foreign ministers’ meeting on Myanmar.

While united in a call for restraint, only four members — Indonesia, Malaysia, the Philippines and Singapore — called for the release of Suu Kyi and other detainees.

“We expressed Asean’s readiness to assist Myanmar in a positive, peaceful and constructive manner,” the Asean chair, Brunei, said in a statement.

Myanmar’s state media said the military-appointed foreign minister attended the Asean meeting that “exchanged views on regional and international issues”, but made no mention of the focus on Myanmar’s problems.

The military justified the coup saying its complaints of voter fraud in the Nov 8 elections were ignored. Suu Kyi’s party won by a landslide, earning a second five-year term. The election commission said the vote was fair.

Junta leader Senior General Min Aung Hlaing has said the intervention was to protect Myanmar’s fledgling democracy and has pledged to hold new elections but given no time frame.

Singapore Prime Minister Lee Hsien Loong said on Tuesday in an interview the coup was a “tragic” step back for Myanmar and the use of lethal force was “disastrous”.

Suu Kyi, 75, has been held incommunicado since the coup but appeared at a court hearing via video conferencing this week and looked in good health, a lawyer said.

She is one of nearly 1,300 people who have been detained, according to activists.

Ousted President Win Myint is facing two new charges, his lawyer, Khin Maung Zaw, said, including one for a breach of the constitution that is punishable by up to three years in prison.

The suspects allegedly opened fire on the deceased judge’s car, says police. Both the suspects …