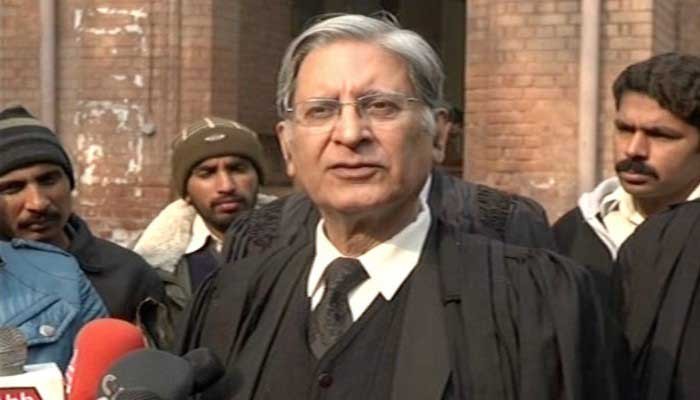 LAHORE: Veteran lawyer and politician, Aitzaz Ahsan has said the case against Jang/Geo Editor-in-Chief Mir Shakil-ur-Rahman was civil and it does not fall under the jurisdiction of National Accountability Bureau (NAB).

Speaking to Geo News on Tuesday, Ahsan said the reference, filed by NAB against Mir Shakil-ur-Rahman, is a 34 years old civil transaction case.

“NAB has filed it under the National Accountability Ordinance, though it does not fall under its legal purview,” he said.

Responding to a question, he said if an FIR [first information report] in a criminal case was registered with a delay of 10-12 hours, the accused are exonerated of charges.

The constitutional expert added if any offence was committed in a 34-year-old property deal, a case could be registered under the LDA Act, to the maximum. “A penalty could be imposed under Article 34 of the LDA Act if there was any illegality. Even a penalty could also not be imposed after the passage of 34 years,” Ahsan said.

He added it was like “digging up the dead” after 34 years. NAB’s severe reaction over the 34-year-old property deal also seemed strange. There seemed some “collateral purpose” behind it, he added.

The legal expert said it was a very important thing, and the court would take notice of it. He said, as per what he believed, the arrest warrant [for Mir Shakil-ur-Rahman] was issued in Islamabad. And that too, at a time when MSR was sitting in NAB’s office.

“The NAB chairman issued the arrest warrants, though an inquiry was still underway in Lahore,” he said.

“On what grounds did he issue the warrants, what documents did he have before him, and what report had hw seen before issuing the warrants,” asked Ahsan, adding it was a well known fact that the inquiry [against Mir Shakil-ur-Rahman] was still incomplete.

MSR was arrested by NAB on March 12 on trumped-up charges relating to property purchased more than three decades ago. A petition was filed shortly afterwards against the arrest.

An accountability court had then extended his physical remand, after which a separate petition was filed against the extension. The petition had argued that no reason was provided by the court for the extension in remand.

The original petition, filed by MSR’s wife Shahina Shakil, had stated that MSR had been cooperating with officials and the arrest was a flagrant violation of the standard operating procedures (SOPs) of the accountability watchdog.

The petition had requested that the court declare the arrest and abuse of the NAB chairman’s authority, as the arrest was made while the case was still in the process of verification.

The petition further argued that NAB had violated the 2019 businessmen policy introduced by the Government of Pakistan by arresting MSR. It further said that the extension in remand of MSR by the accountability court hearing the case should be declared null and void, along with the decision to arrest him.

According to a Jang Group spokesperson, the property was bought from a private party 34 years ago and all evidence of this was given to NAB and legal requirements fulfilled, such as duty and taxes.

MSR’s arrest has been slammed both locally and internationally as an attempt by a heavy-handed regime to suppress dissent and the freedom of speech.

Share
Previous Facebook’s Oversight Board won’t launch until ‘late fall’ – TechCrunch
Next When I played against Sourav Ganguly, I hated him: Naseer Hussain